The board of Bonner County commissioners unanimously denied an application to vacate a 2,550-foot section of Camp Bay Road before a packed audience Feb. 16, marking the second planning and zoning hearing in as many weeks to run longer than four hours.

It was also the second time the board ruled on the application from M3 ID Camp Bay, LLC, which is developing the lakefront located at the end of the road. The first time commissioners considered the request, in April 2021, they approved it — a decision later overruled by a district court judge who decided that the board “failed to issue an adequately written decision” and failed to acknowledge a potential conflict of interest by then-Bonner County Road and Bridge Director Steve Klatt, who simultaneously served as a consultant on the Camp Bay development. 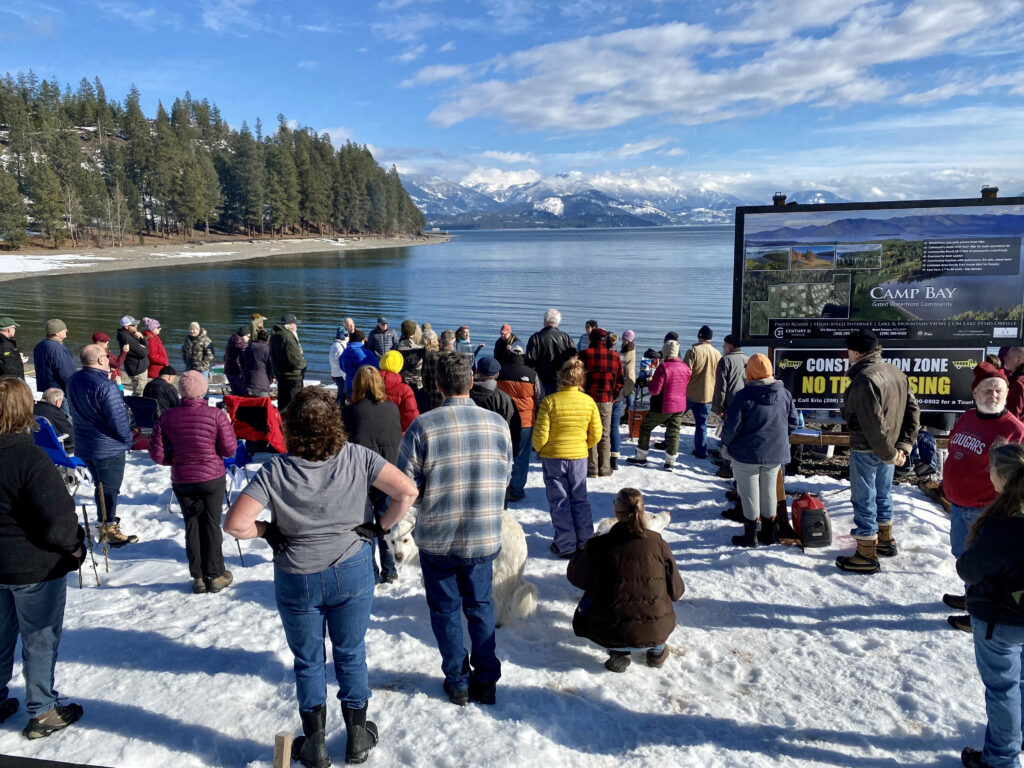 Members of the public gather on the shore at Camp Bay for a barbecue and meeting on Feb. 12 to discuss their opposition to Bonner County’s decision to vacate the Camp Bay Road. Photo by Keith Bansemer.

Alfred and Jennifer Arn brought the petition for judicial review on the grounds that Camp Bay Road provided public access to the lake, and the court agreed, stating that it is “a public road that provides access to Lake Pend Oreille” which “extends from Sagle Road to its termination at the high-water mark of Lake Pend Oreille in Camp Bay.”

The court remanded the decision back to the county, which would bring the issue of the high water mark — and therefore the legitimacy of the community’s claim to public access — to the forefront of discussion on Feb. 16. Ultimately, that debate would become the sticking point for the board’s decision to deny the road vacation.

The Wednesday hearing saw more than 40 comments against the road vacation, with the overwhelming sentiment in the brimming Bonner County Administration Building first-floor meeting room being opposition to the action. Planning staff also noted that a petition with “several hundred signatures” opposed to the application had been submitted prior to the hearing — a hearing meant to determine whether vacating the road was “in the public interest.”

“The present and future citizens of Bonner County will benefit more from keeping this public right-of-way than from vacating it,” said Susan Drumheller, of land use watchdog group Project 7B — an entity that has consistently argued that the right-of-way, and therefore public access, extends to the lake.

Drumheller went on to cite a portion of the county’s Comprehensive Plan, which states: “Public recreational accesses and amenities shall not be obstructed or adversely impacted by future development.”

While Doug Marfice, a lawyer representing M3, told commissioners that the public access argument was “misinformation” being spread by “well-meaning but ill-informed citizens,” the Feb. 16 hearing saw dozens of comments identifying the section of shoreline as a widely used public access point.

Many pointed to the decreasing amount of access to Lake Pend Oreille, with lifetime county resident Jennifer Wood stating: “There is so little left on this side of the lake. You can’t walk to the Green Monarchs and jump in.”

Klatt, now retired from his position with Bonner County Road and Bridge, also commented during the hearing, assuring commissioners and the crowd that he “truly was completely hands off” with any interactions between the county and M3 ID Camp Bay, LLC. Public testimony also saw statements from several members of the Green family, whose siblings have long been embroiled in a widely reported dispute over their parents’ Camp Bay land, now being developed by the eldest brother.

The commissioners’ denial ultimately hinged on the definition of the high water mark — a nebulous measure when looking over the historical records, as Lake Pend Oreille’s shores have seen many changes since Camp Bay Road was established in 1909, due in part to the construction and operation of local dams beginning in the 1950s. While surveyor Geremy Russell, on behalf of M3, pointed to the road’s original terminus point — or end — above today’s summer pool lake level (also known as the “artificial” high water mark), other local legal professionals testified that precedent and historical record actually place Camp Bay Road’s end at the present-day, legally recognized “ordinary” high water mark — 2,051 feet, or, winter pool lake level.

This discrepancy resulted in what Commissioner Dan McDonald called a “quandary” during the board’s deliberation, calling the vacation decision one of the hardest in his five-year stint holding office.

“We’re tasked to stick with the law,” he said. “I appreciate everyone’s opinion and want to preserve more lake access — I get that. But what I’m struggling with is, is there really public access there?”

Commissioner Jeff Connolly called the access issue “the kicker” in his difficulty coming to a conclusion on the file. Commissioner Steve Bradshaw expressed similar concerns over the debate about the extent of the road’s right-of-way, and ultimately brought forward the motion to deny, which passed with a unanimous vote.