Ken Burns and Lynn Novick’s new PBS doc on Hemingway is stellar, but its subject is played out

It’s hard to imagine what more can be said about Ernest Hemingway. Born in Illinois in 1899, died by self-inflicted gunshot in Idaho in 1961, in the interim he became the most celebrated American writer of his time and fundamentally altered English-language literature with his iconic, terse style.

It has been 60 years since Hemingway shot himself at his home in Ketchum — meaning he’s been dead almost as long as he was alive — and it’s been about 100 years since his breakout novels and short stories of the 1920s. In the meantime, his works have passed into canonic status; taught in schools and adapted into films. That said, far more outsized than his literary output is the legacy of his life and personality. 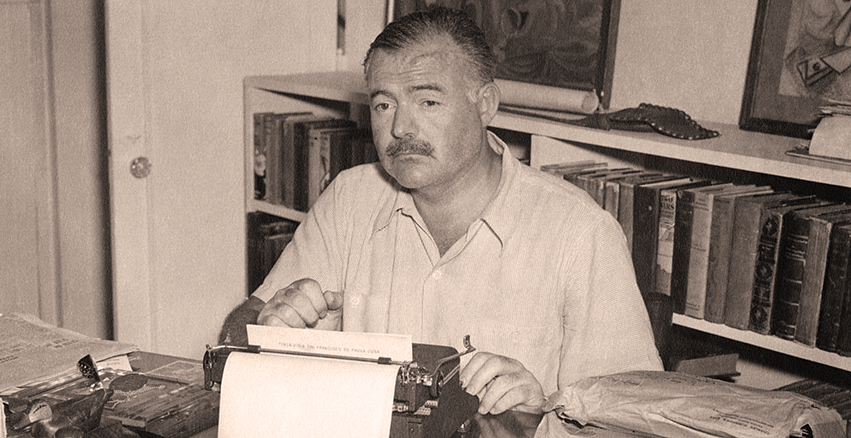 Ernest Hemingway at work behind his typewriter. Photo from Ken Burns’ documentary Hemingway.

Thousands of books, articles and academic papers have been written about Hemingway’s life, his personal letters have been published and parsed for decades, there’s a center for Hemingway studies at Boise State University, there are Hemingway look-alike contests near his old haunts in south Florida, there’s a Hemingway festival and conference in Ketchum, his face was put on a U.S. postage stamp and there are at least three bronze statues of Hemingway — one of them leaning against the bar top at the Floridita in Havana, Cuba, and another doing the same in Pamplona, Spain. Every house or apartment he lived in, from Illinois to Paris to Spain to Florida, Cuba and Idaho, is set aside for some historic preservation or mention.

Truly, it seems Hemingway has attracted much more than his fair share of attention. Not so, apparently, with the April 5 premiere of the three-part documentary series Hemingway on PBS. Put together by documentarians Ken Burns and Lynn Novick — legends in their own right — the episodes purport to reveal “the man, the myth, the writer.” Of course, this is the goal of every Hemingway biography, whether in print or on film. That Burns and Novick are not just any old biographers makes Hemingway superior to most every other effort to capture “the man, the myth, the writer.” It’s tightly written, well paced and organized, gorgeously illustrated with archival and personal photos, and impeccably sourced — particularly pleasing is that Patrick Hemingway makes numerous appearances to give first-hand accounts of his “Papa.”

Despite all this, there is precious little new to gleaned from Hemingway. Anyone who has read the books both by and about the writer will come to this documentary already fully informed of the complexities of its subject’s character. That he was as kind, loyal and fun-loving as he was cruel, faithless and depressed. They will already know all about the hyper-masculinity and corresponding tortured androgyny of Hemingway’s life and art.

They will know that he was a liar and self-mythologizer as much as a profoundly wounded and traumatized veteran of war and family tragedy. They will know about the many wives he loved and betrayed in turn; about the children he alternately abandoned and lorded over.

They will know that he suffered crushing insecurity and anxiety, that his body was severely punished by accident and intent — the latter in large part from the lifelong alcoholism that eventually drove him to his final act in the vestibule of the Ketchum house.

It’s hard to pinpoint exactly where Burns and Novick break any new ground with Hemingway, but that’s not their fault. There simply isn’t much more to be said about the man, which begs the question of why this documentary series was necessary — especially at a cultural moment in American life that seems more far removed from Hemingway’s world than his was from the stuffy Victorianism against which his fellow “Lost Generation” artists rebelled.

Even during his own life Hemingway — both his work and the cult of personality he’d cultivated — had become a caricature. His perceived redemption with The Old Man and the Sea, which propelled him to a Nobel Prize, is somewhat doubtful. As Irish writer Edna O’Brien — herself credited as among the greatest writers now living — said in Hemingway, it was a “schoolboy” effort. “He was the bloody fish,” she said.

Still, it seems to be news to some people that Hemingway was by and large a ridiculous, vainglorious asshole, and the discussion about how to separate the faults of an artist from his or her art has been had about Hemingway since even before the writer killed himself. Yet, it’s an important part of our contemporary conversation about so-called “cancel culture” and how (or whether) to hold accountable those with political, economic and cultural power for their transgressive actions, beliefs or statements.

Burns and Novick do an admirable, yet yeomanly, job of laying out this writer’s life in chronological order, but to what end? We need little reminding that Hemingway existed, nor are the contents of that existence particularly surprising after so much attention over so many years. Lacking much real analysis, Hemingway feels like a panegyric even and perhaps especially as it revels in poking at its subject’s well-known warts.

As a lifelong Hemingway aficionado, I left the series feeling what I usually do when I contemplate Hemingway for too long: sadness and what the Germans call fremdschämen, defined as embarrassment on behalf of another. Also with the sense that maybe it’s time to let Hem rest in peace. Surely, there are other literary lives — many only now unfolding — worthy of some attention outside the long shadow of Papa.