For Rich Lindsey, Priest Lake is a dream come true.

He grew up reading articles in magazines about sportsmen traveling to distant areas and catching monster lake trout, but he never imagined at the time he’d live that life, working as a fishing guide for tourists seeking the perfect fishing experience of the summer.

“I got the opportunity and built a strong vibrate business, creating a lifestyle other people only dream of,” he said.

Now the Priest Lake fishery stands at a crossroads, and he worries that the choices in the coming months could determine the fate of his business. 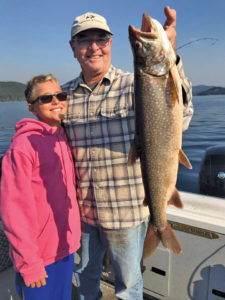 Rick Lyman shows off an impressive lake trout with his grandson after a fishing trip on Priest Lake. Photo by Rich Lindsey.

Depending on the outcome of a public engagement process occurring throughout the remainder of this year, the Priest Lake fishery could remain as it currently is, or it could be managed toward a return to the fish species of its history. Whichever path is chosen, there will be people unhappy with the decision.

According to Dux, the question of Priest Lake fishery management first came up in 2012, when officials heard some community members wished to see a return to the native kokanee, cutthroat trout and bull trout that dominated the fishery decades ago. That would require management practices against the lake trout, or mackinaw, that currently dominate the lake. Fish and Game personnel began outreach to learn the community’s will and found a 50-50 split between those who wanted change and those who wanted to maintain the status quo. They then formed an advisory committee in 2013 to further clarify the issue.

As it turned out, there are innumerable opinions in the Priest Lake region over fishery management, Dux said. They boiled those opinions down to three possible options for the future of fishery management. The first is also the simplest: simply maintain the existing policies favoring mackinaw while continuing to support native fish restoration in Upper Priest Lake.

The other two options would shift the balance of the fishery in differing ways. The first would take more aggressive measures to restore the kokanee population toward high catch rates and harvest. The plan would also support a resurgence of cutthroat trout and introduce more bull trout into the lake, all policies that would require a lower-density lake trout population. The final alternative would encourage moderate catch rates and density among lake trout and kokanee alike while improving conditions for native cutthroat trout and bull trout, an outcome that would require curbing lake trout populations. It’s also the most challenging option on the table.

However, fishermen like Lindsey are unlikely to support a plan that hurts the lake trout population. He said that’s because Priest Lake has developed a reputation for its exceptional lake trout, and the majority of his business as a chartered fishing guide comes from people looking to fish for that specific species. One of the reasons Priest Lake lake trout are so desirable is their primary food source: the small, freshwater mysis shrimp. Thanks to their mysis-rich diet, Priest Lake lake trout boast vibrant, red meat that makes them a popular choice for the dinner table.

Priest Lake mackinaw also have a reputation for being enormous, but according to Dux, trophy-sized catches have waned over the years. Once again, he said mysis shrimp are the cause of the diminished sizes. Originally introduced in the 1960s as a food source for kokanee, mysis shrimp instead became the primary food for lake trout after predation by the species caused the collapse of the kokanee population. Consequently, Dux said lake trout growth is typically stunted compared to fish from years gone by. Most are a far cry from the record-setting 57.5-pound lake trout caught by Lyle McClure in 1971.

Lindsey worries that if Idaho Fish and Game decides to manage against the lake trout population, it will result in a years-long process of catching and killing the fish via gillnetting. He sees this as a costly and wasteful direction for fish management.

Dux, however, said it’s still too early to discuss specific management techniques if Idaho Fish and Game decides to change its fishery policies.

“We really haven’t put the effort into that yet because it’s not something that makes sense to figure out until we know whether that’s the way people want us to manage the fishery,” he said.

He also said Idaho Fish and Game as no stake in or preference toward any particular outcome.

“One of the things we’ve been trying to communicate to people — which has been sometimes difficult — is that we’re not trying to advocate for anything,” he said.

A series of community meetings over the summer kicked off the public engagement process. Idaho Fish and Game then introduced a survey to further solicit opinion, which is still available to fill out. Dux said they will send the survey to a random selection of license-holders in October. After that, he believes the organization will be well-prepared for a decision to come next year.

Lindsey said that for him, there’s a lot riding on that decision.

“I’ll be done working here (without lake trout),” he said. “No one wants to go fishing for catch-and-release cutthroat only.”