Fractured Lines: Winter ain’t over yet

It sure feels like we’re in a slow, muddy slide into spring, doesn’t it? It won’t be long until the snow in the valley has melted and the North Idaho mud season has officially begun, and it feels like it’s a month early.

The weather in the mountains has been teetering on the edge of a big melt, but thankfully we haven’t gotten it yet. If you venture into the high country, you know full well that it is still winter, and with a better than average snowpack this year, we have plenty of snow to open up the terrain. What may be a little less obvious, with the warm temperatures, moderate snowfall, and an overall felling of spring, is that this is still avalanche season. 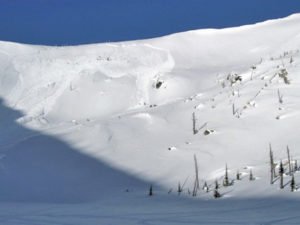 One fatality occurred in this avalanche that was triggered on an east aspect above McCormick Lake in March 2008. Courtesy photo.

There are a couple of reasons why our avalanche danger persists into the spring-time months.

One reason is that North Idaho is blessed with a lot of trees, and maybe not so blessed with brush. All this vegetation helps to stabilize the early season snowpack by poking up through it and holding it on the mountainside.

A densely-forested hillside is not going to slide, but be careful of those openings. It usually takes about four to five feet of snow to fill in over boulders and brush and tree limbs to open up the terrain enough where the anchoring effect of vegetation is no longer stabilizing the snow. One thing to keep in mind is that if you’re on a steep slope and you can get through the trees with minimal effort, they’re not providing enough anchoring to prevent a slide. With 6-8 feet of snow terrain features become filled in and the landscape becomes smooth. Weak layers in the snowpack can run for hundreds or even thousands of feet, uninterrupted by bumps or dips that might arrest a propagating fracture.

When you see a picture perfect vertical canvas of smooth, untracked snow you should be thinking, “How stable is that slope?”

By February, the mountains of North Idaho have built up many layers of snow that may harbor a number of weak layers. Some of these weak layers settle out over time and stabilize. Others can persist for a week, or a month. With a deeper pack built up over some of these persistent weak layers, they are under a lot of stress. You may be the extra load that’s needed to wake the sleeping giant.

One more factor that is isolated to the ridgetops is the effect of wind. Wind moves a lot of snow. In our mountains most of the wind is blowing over the ridgetops from west to east. That means the deepest snow is normally on the easterly aspects, from north to southeast looking at a compass. What used to be a gradual slope with no snow cover is now a steep and imposing feature at the top of the mountain. Think overhanging cornice with a bulging pillow of snow below it.

Slope angle is an important factor in triggering avalanches. If you increase the slope angle, you increase the likelihood of triggering an avalanche. Thirty to 45 degrees is prime avalanche steepness, and many of the windloaded ridgetop features we like to play on are in the upper range of that. Roman Nose, Echo Bowl, Keokee Peak, Jeru Ridge, Sheep Mountain, McCormick Lake, Trapper Peak and Savage Mountain are all places where fatal accidents have occurred in February and March.

So next time you’re out with your friends and you’re relaxing in the sun at the top of a mountain, snap out of it and realize that although it may be spring in the valley, it’s still avalanche season in the mountains.

Kevin Davis is a Forest Service hydrologist and assistant director of the Idaho Panhandle Avalanche Center.  He spends his summers in the creeks and streams of North Idaho fixing roads and culverts and bridges and fish habitat and winters in the mountains producing the avalanche advisory and teaching avalanche classes.