Harold’s IGA to play special weekend show at Back Door

When you play in a band in a small town, it’s important to change things up every once in awhile or you (and the crowd) will grow bored with the same old dog and pony show.

As an attempt to shake things up, my band Harold’s IGA is playing a special two-night show this weekend at the Back Door bar. 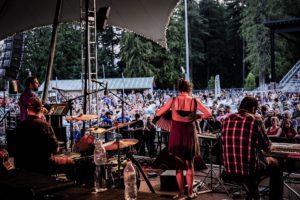 Harold’s IGA plays the Festival at Sandpoint, opening for Sublime with Rome in summer 2018. Photo by Will Harrison.

The first night will be Friday, Jan. 18 and features a whole two hours of music Harold’s IGA has never played in public before. There’s a band called The National which is well-known for their brooding, methodical songs and intricate arrangments. The songs are cryptic and nostalgic, oftentimes enegmatic.

Harold’s IGA will play a special piano lounge set this first night, playing all covers written by The National. While songs by The National are normally are played by a five-piece band of amazing musicians, this will be a three-piece stripped down lounge set. With Cadie’s additions on multiple instruments and Josh Vitalie’s driving, dynamic percurssion, this set will be one to sit back, sip your drinks and listen to these amazing songs.

The second evening will take place Saturday, Jan. 19, also at the Back Door. This night will be a smattering of oddities, including originals that have never seen the light of day, obscure covers on an electric guitar, Latin songs, sailing songs written while crossing the Atlantic Ocean and more.

Both nights are free, so head down to the Back Door for a weekend of a different side of Harold’s IGA.

Editor’s note: Ben Olson is the publisher of the Reader and this is a shameless plug for his fledgling band.