Hands off the horn

For years, the Memorial Community Center in East Hope hosted the Hope Farmers’ Market on its lawn. The weekly event was one of lakeside summer serenity — that is, unless a train went by. 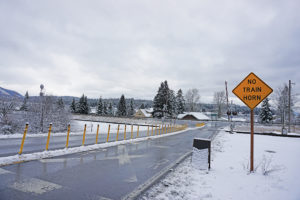 Located directly beside a railroad crossing, market attendees were wise to set down their goods and cover their ears when they heard the progressive rumble of an approaching train. The blast of a train horn is alarming at any range, but from mere feet away, it’s unsettling.

In recent years, that crossing has undergone visual and audible change. Running down the center of the road leading to either side of the crossing is a bright yellow median and, as the train goes by, there’s no horn — only the sound of metal wheels barreling down the track.

That’s because, in 2017, the train crossing at Centennial Boulevard in East Hope became an official railroad crossing Quiet Zone through the Federal Railway Administration.

According to the FRA, only two Quiet Zones exist in Idaho: the one in East Hope and another in Rathdrum.

Residents living in the Ponder Point area of Kootenai are currently working on the state’s third. Bonner County Road and Bridge Staff Engineer Matt Mulder sought approval Nov. 26 from the Board of Bonner County Commissioners for a Quiet Zone on Kootenai Bay Road. Under FRA rules, the entity that oversees maintenance in the area — in this case Bonner County — must sponsor the application for the Quiet Zone. Commissioners voted unanimously to sponsor the application.

Residents in the area are paying for the project as the Ponderay Kootenai Quiet Zone, LLC. The anticipated cost is about $15,000, Mulder said, and residents will transfer those funds into escrow before the county can solicit bids for a contractor to build the required safety features for the Quiet Zone. Mulder said he anticipates construction on the Kootenai Bay crossing to begin sometime in summer 2020.

Residents in East Hope also paid about $15,000 for their Quiet Zone, according to East Hope City Councilwoman Deborah Field. The funds are largely to cover the cost of the median, which prevents people from going around the crossing gate when it’s down.

As with most communities that pursue Quiet Zones, Field said the noise factor inspired a group of citizens to look at applying for the designation several years ago. It wasn’t until 2015 that Field said funding the project through local donations was possible.

“Because of the increased train traffic through the area, the horn noise was intrusive and adversely affecting our small city,” Field said. “With the plan to grow over time, a Quiet Zone would play an important role in making East Hope a more appealing place to live.”

“It takes time,” she said. “After all was [said] and done it took us more than two years to make it happen.”

That time is spent making sure the crossing features all safety measures required by the FRA, assessing risk for the crossing and obtaining support from all affected state and local agencies. Field said the FRA rules for Quiet Zones are “difficult to weed through,” but the agency is helpful throughout the process.

Still, not everyone is so keen on quiet train crossings. FRA-certified Quiet Zones across the country have received widespread criticism for circumventing what many see as a vital train safety feature: the horn. A railroad official in Wisconsin, where there are almost 100 Quiet Zones, characterized the issue as a balance between being sure residents are safe while also being sure they have a quality of life.

Despite the perseverance it took to make it a reality, Field stands by the East Hope Quiet Zone as the right choice for her community.

“Many people said it wasn’t possible,” she said, adding her advice to those seeking Quiet Zone approval: “Don’t give up.”