The Inland Northwest cleans up after devastating windstorm

Avista crews reported more than 150,000 customers still without power Wednesday morning after Tuesday evening’s windstorm swept through the Inland Northwest. The utilities company said the storm was the most devastating natural disaster the utility has faced in its 126 year history.

In Sandpoint, Sheriff Daryl Wheeler reported there were 64 calls to 911. 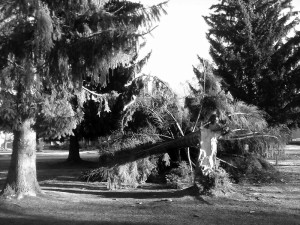 A downed tree on the corner of Cedar and Boyer after Tuesday night’s windstorm. Photo by Ben Olson.

“It was totally crazy last night,” said Sheriff Wheeler. “Reports came from all over the county of trees falling on houses and cars. There were lots of trees down on power lines.”

Because of the power failure, the electricity went off at the 911 dispatch center, losing connection to dispatch for an hour. Power was restored quickly, after a fuse was replaced on a backup generator.

“Ponderay County dispatch was also out for several hours,” said Wheeler. “Our dispatchers had to call Newport ambulances. There was great intercounty cooperation.”

Wheeler said many of his deputies were dispatched via mobile phones.

Damage reports list multiple downed trees across the county, as well as some roofs blowing off due to high winds. An apartment building on Pine Street lost a dozen sheet metal roof panels, sending them flying into a power line. The block was still without power as of Wednesday evening.

All schools within the Lake Pend Oreille School District were closed Wednesday because of widespread power outages across the county.

In Spokane, two women were killed by falling trees, but thankfully no losses of life were reported in North Idaho. 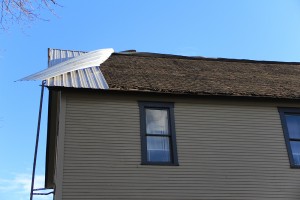 A piece of sheet metal hangs off the roof of an apartment building at Pine and Forest the morning after a wind storm left over 150,000 people in the Inland NW without power. Photo by Ben Olson

There are no definite estimates for when power will be restored across the region. Crews are working overtime to get the power back, but people are urged to be prepared for 3 to 5 days before the lights will come back on.

As always, please stay away from all downed power lines. Always consider them live, and call the Sheriff or your power company to report the outages.