A bit of apprehension about the future is common among incoming college students. However, such is not the case for recent graduate Bryant Moore, who has his sights confidently set on a career in nursing.

“I’m not nervous about getting into college and realizing that this isn’t what I want to do,” he said. “It’s just something that’s close to my heart.” 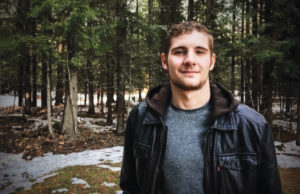 Moore’s passion for nursing began in his childhood, with his father’s career as an EMT.

“When I was a little kid my dad would take me on EMT rides, and I’d sit in the front and listen to the radio, and I think that’s where my love of medicine came from,” he said. “I wanted to do something with my life that I thought was meaningful, and nursing fit well.”

Moore is set to attend North Idaho College this fall, where he plans to later complete their online RN program, and eventually work as a flight or MedStar nurse.

Moore graduated from Clark Fork High School alongside 10 classmates this spring as the Salutatorian of his class. During the graduation ceremony, he delivered his speech with Valedictorian TJ Henderson, with whom he had attended school since preschool.

“We sat down a wrote it together, and in the end we both had our own part. It seemed right to do it that way because TJ is like my brother,” he said. “Coming from such a small school, our class was kind of like a family.”

Moore says that though he’s excited for all his future holds, graduating was bittersweet.

“It kind of hit after graduation, after you take the cap and gown off and you sit at home with your family and you realize, ‘OK, now I’ve got to settle in and make life mine.’ I’m really excited to start this new chapter of my life, and to see what I can do with it,” he said. “I’m not so much nervous, I just want to get it started. I feel like a kid waiting for Christmas.”

Moore chose North Idaho College to stay close to family in the area, and for the expansive dining options. He joked that he’d never lived in a town with fast food restaurants, so he’s excited for that.

“Especially after taking a couple college classes, you realize there’s more knowledge out there than little old Clark Fork has to offer,” he said. “There’s just so much to learn.”

With a handful of college credits already under his belt from dual enrollment courses, Moore is well on his way to completing his prerequisites soon. Moore will have classes two days a week at NIC, leaving room in his schedule for a part time job.

“I didn’t come into high school thinking I’d come out with all the college credits I’ve got now,” he said. “Our librarian, Dawn Schatz, challenged me to try dual credit classes, and I took on the challenge and loved it.”

Moore’s long-term goals include becoming a nurse practitioner and opening his own health clinic in the area. He emphasized his interest in pediatric mental health as an inspiration for his ambitions.

“I went through some hard times during high school so I’ve felt the struggle, and that’s kind of where nursing comes in. Sometimes someone just stepping in and talking to a patient can change their whole outlook on health…and we need great people in that field.”

This series of recent graduate profiles was written by McCalee Cain, a recent SHS graduate who has spent her summer interning with the Sandpoint Reader.