Gardening with Laurie: Beauty of blue

Blue flowers are scarcer than most other colors. You see a lot of them advertised in plant catalogs, but mostly they are actually purple. “Johnson’s Blue” geranium? Blue flag iris? Both purple. Blue flowers are coveted, and calling them blue increases sales. Photos are tuned up to look bluer. And some people truly cannot see the difference – I’ve stood before plants that looked purple to me, and had the owner proudly say “Blue!” So, which plants can really claim to be blue? 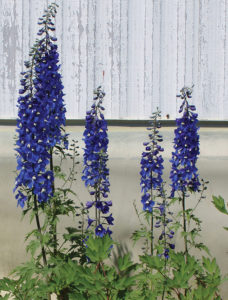 One of the best sources of blue is the delphinium family. From the palest ice blue “Magic Fountains Sky Blue” to the medium blue “Pacific Giants Blue Bird” to the brilliant deep blue of “Blue Jay,” delphiniums provide a range of true blue. Blooming in early summer, they will repeat again in late summer if you cut them back right after blooming. Place these tall beauties against a wall or fence, tie or stake well, and feed heavily.

Some veronicas are true blue. “Royal Blue” is true blue, and reblooms. It’s a rather floppy plant, which makes it perfect for a design trick I like – blue flowers as water – let it hang over rocks and it’ll give the illusion of falling water. Veronica peduncularis “Georgia Blue” is a shorter, smaller plant that is also true blue and has the same sprawling habit.

Annual lobelia is another good plant for this watery look if the area is shady. “Crystal Palace” is variable, with some seed lots being true deep blue and some with a touch of purple, so look carefully. “Cambridge Blue” is a true sky blue.

Lesser known is Anchusa azurea (Bugloss). While the leaves are painfully hairy and coarse, the flowers are intense blue stars. Listed as an early spring bloomer, I’ve known it to bloom for two full months and repeat in fall. This plant needs excellent drainage or the rosettes will rot. Don’t expect blooms the first year and in fall cut back and clean up the leaves before they turn brown. They are pricklier when dried up!

Anagallis monellii is a perennial, but not hardy here. It grows fast and blooms the first year, though. It’s a crawler with dark lapis flowers that open and close according to the weather. A ground hugger, it works well in a basket.

For a carpet of pale blue, sow some forget-me-nots. Myosotis will not usually bloom in its first year but after that, you will have it forever. Blooming early for a long period, it makes a solid ground cover. When bloom becomes sparse, pull it out before it can develop mildew. By this time it will have dropped enough seed for next year’s plants – actually, enough seed to cover the entire world if not kept in check. Another super easy blue annual is Bachelor’s Buttons. Available in dark, medium or light blue, they will also perpetuate given a chance, but not to the extent of being a problem. Nigella comes in blue; they are wonderful plants with odd, almost skeletal stems, starry flowers, and weird, bulbous seed pods. Most blue pansies have a purple cast to them, but “Morpho” is a blend of pure mid-blue and yellow; “Lake of Thun” is a clear, dark blue.

Other self-sowers: borage, a cucumber-flavored herb, has star shaped blue flowers. Occasionally the flowers are pink or even half pink/half blue, all on the same plant! Chicory has medium blue flowers that open in the morning and close at noon. The leaves look like dandelions, and risk being weeded out unless it’s in bloom. And, of course, Heavenly Blue morning glories, those brilliant trumpets. Plant them on the east side of the house, and they’ll stay open longer than on the south.

Some foliage is called “blue” — blue hostas, blue spruce, blue junipers, blue Atlas cedars. They are really more gray than blue, but are good for echoing the blue theme.

A garden of all blue sounds soothing, but remember that a blue that is slightly “off” will look even further off if put next to a truer blue. To make blue stand out, add other colors. Blue and white has a very light feel while still being “cool” — even more effective with gray foliage. Yellow punches up blue and gives a Monet’s garden effect. Blue as an accent can be electrifying; picture a tall blue delphinium in a bed of creamy “Moonbeam” coreopsis, “Windrush” roses and yellow marigolds.