When local farmer Lisa Troutner needs a new color for her palette, she doesn’t squeeze it from a tube of paint – she grows it in the ground. 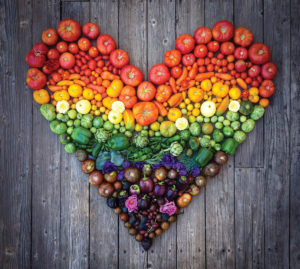 Troutner moved to North Idaho a couple years ago to establish her Carmel Bella Farm in Selle Valley, where she grows hundreds of different varieties of plants organically. Instead of just eating or selling the produce, Troutner began creating intricate mosaic works of art and putting photos of her creations on Instagram. As a result, she now has a healthy following of almost 45,000 people, all of them eager to see what she comes up with next.

Troutner said the origins of the idea came from her desire to share organic gardening with the world.

“I was trying to think of a creative way to share my organic growing, so I started putting pieces together on my deck,” Troutner said. “It started growing and growing, and it was so much fun.”

Troutner said after creating a few of the pieces, she began thinking of her family and heritage.

“My grandmother on my mom’s side is a stained glass artist, and my grandmother on my dad’s side did mosaic art,” Troutner said. “Also, my father is a stone mason and he would do intricate rock walls, almost like mosaics. It doesn’t seem like (mosaic work) is something that was genetic, but it does seem that we always wanted to see something come together from multiple pieces.”

It was her maternal grandmother who first planted a passion for growing tomatoes in Troutner – a passion that has continued today.

“She grew tomatoes in Croatia and moved here in the 1950s,” Troutner said. “She’d cook for us at the garden. … I have 800 tomato plants in my grow room right now. That’s my specialty crop, that’s my passion.”

Troutner said that heirloom tomatoes are a blast to grow, especially in all the varying shades of color her art demands.

“If I need more purples, I grow exotic heirloom produce,” she said. “It’s very rare for blues to be in nature, but I grow a lot of lavenders and purple basils, trying to find the others to blend all the colors together.”

Troutner’s pieces are all different and all equally striking. One, called “The Sea of Dreams” features abalone, heirloom tomatoes, hibiscus and roses. Another, called the “Heart’s Journey” is shaped as a heart with a river trickling through it.

“It’s really fun to create,” Troutner said. “It takes a lot of time, but if I don’t like something I’ll take a break and come back when I’m feeling inspired again.” 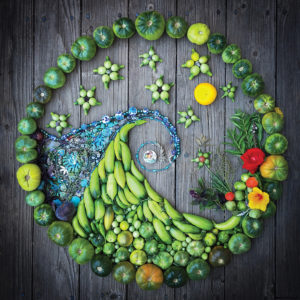 Troutner will display a couple dozen of her favorite pieces at a special exhibition at the Pend d’Oreille Winery on Saturday, April 13, from 5-8 p.m. There will also be live music by Justin Lantrip at the event. The pieces will remain at the Winery through the month if you can’t make the opening.

For Troutner, sharing her garden art is integral with promoting the healthy lifestyle that comes with growing organic vegetables.

Troutner came to North Idaho because her father owned property on Wrenco for the past 30 years, and her brother lives in Sagle. Troutner’s farm in Carmel Valley in California was 100% organic.

“Everything I do is 100% organic,” she said. “I haven’t gotten my certification yet on this new farm since this is our first growing season, but hopefully that will get going pretty quickly.”

One passion of Troutner is to convince farmers that organic farming is rewarding.

“A lot of people fear that organic farming is more work, but if you really tailor your growing, you make sure to not grow something that the bug in your area is obsessed with,” she said. “There are strategies, but I don’t think it’s that much harder at all. My kids have been raised on organic produce and just knowing that they can pick something out of the ground and eat is one of my greatest passions. My artwork is a way to honor the organic farming and to show people and say, ‘Look at these beautiful vegetables!’”

Check out Troutner’s Garden Art at the Pend d’Oreille Winery on Saturday, April 13 from 5-8 p.m.