Gandhi, the Buddha and the limits of non-violence:

A tribute to the Mahatma on his 145th Birthday

“I felt I was in the presence of a noble soul, a true disciple of Lord Buddha, and a true believer in peace and harmony among all men.”

I wish to celebrate Gandhi’s 145th Birthday (Oct. 2) by comparing his ethics of non-violence with the Buddha, whom Gandhi called the “greatest teacher of non-violence.”

When I began my research on Gandhi during my 1992 sabbatical to India, I fully expected that I would interpret his philosophy from a Hindu or Jain perspective. Gandhi claimed that he learned much from the pacifist Jain monks in his home state of Gujarat, but he eventually broke with them over their belief that the rule of non-violence was absolute. 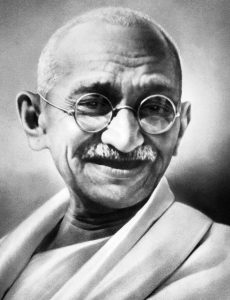 When I closely examined Gandhi’s doctrine of non-violence, I was compelled to interpret him in Buddhist terms. Given the two major schools of Buddhism—the Theravada of Southeast Asia and the Mahayana of Tibet, China, and Japan—Gandhi comes to the ideals of the latter.

In the Theravada Buddhist laypeople gain merit making offerings to monks and their monasteries, but in the Mayahana exceptional laypeople earn so much merit that they can bestowed it on others as grace. They are Bodhisattvas—“beings of enlightenment”—who lead all begins to salvation.

Gandhi actually allowed many exceptions to his vow of non-violence, based on very realistic and pragmatic considerations. Throughout October 1928, Gandhi carried on a lively debate with various respondents in his journal Young India. Gandhi defended his decision to euthanize an incurable calf, and even went on to list the conditions for human euthanasia. He also thought that tigers, snakes and rabid dogs might have to be killed if they threaten human life. Both Hindus and Jain were scandalized by these thoughts.

If a man who runs amuck and threatens to kill others, Gandhi insists that he must be killed; furthermore, the killer should “be regarded a benevolent man.” Gandhi once told a Jain friend that non-violence was not absolute and that one should always be “capable of sacrificing nonviolence for the sake of truth.”

Once a group of men appealed to Gandhi because their village had been looted by bandits, and their wives had been raped. They said that they had followed his doctrine of non-violence, but they now despaired about why it did not work.

Gandhi condemned the men as cowards, because in this case the virtue of courage preempted the virtue of non-violence. Passive resistance in the face of great danger is sometimes not the right action, and “protective force,” an apt phrase from Marshall Rosenberg, may be necessary. Early in his career Gandhi supported the British in the Boer War and in World War I.

In some Mahayana schools Bodhisattvas may kill persons who will, if not stopped, murder others in the future. These Buddhists defend such “preemptive strikes” with this reasoning: Many lives would be saved and the murderers would be saved from the horrors of hell (yes, many Buddhists believe in hell). Unfortunately, Tibetan Buddhists used this argument to wage war against Buddhist sects they thought were heretical and therefore a danger to the future of Buddhism.

The vow of all Bodhisattvas is that, even though they have no karmic debt, they will stand at the door of Nirvana until all sentient beings have passed before them. The Bodhisattva also declares that “I, for the good of all creatures, would experience all pain and unhappiness in my own body,” a significant parallel to the passion of Christ.

Gandhi amazed his disciples and bedeviled his opponents by doing their penance for them. He called it “self-suffering” for the sake of others and the “good of all.” He underwent many long fasts vowing not to eat until his disciples reached an acceptable level of spiritual development, or until Hindus and Muslims stopped fighting each other, or until the British gave Indians their independence.

Because of this, Indian writer Ramjee Singh called Gandhi “the Bodhisattva of the 20th century.” We should not, however, press this comparison too far. Not even his most ardent followers have claimed that Gandhi was sinless or had the redemptive powers of a savior. Gandhi most definitely did not claim to have taken away the sins of the world as Buddhist and Christians claim their saviors do.

Nick Gier taught philosophy and religion at the University of Idaho for 31 years. Read excerpts from this book The Virtue of Non-Violence: From Gautama to Gandhi at webpages.uidaho.edu/ngier/VNV.htm.