If brevity is the soul of wit, then prepare for some sharp, incisive filmmaking when the Manhattan Short Film Festival rolls into town this weekend.

Short films too often get short shrift when it comes to reaching an audience. Since they don’t fit into the conventional distribution model designed for feature-length films, they can have a tough time finding an audience. That’s why short film festivals are so important. They provide a venue for some of the year’s best work, irrespective of length, from talented filmmakers. 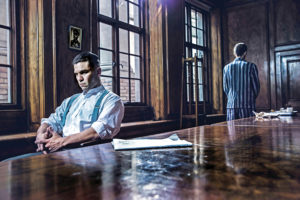 “Hope Dies Last,” a film about a Nazi prisoner working as a barber, is one of the many films featured at the Manhattan Film Festival. Courtesy photo.

The Manhattan Short Film Festival takes place between Sept. 28 and Oct. 8., during which more than 100,000 audience members across six continents will vote on the best film included in the year’s collection. Sandpoint movie lovers won’t be left out in the cold. There are several opportunities to see the Manhattan Short Film Festival at the Panida Theater starting tonight — Thursday, Sept. 28 — at 7:30 p.m. Additional screenings are scheduled for Friday, Sept. 29, at 5:30 p.m. and 8:30 p.m. and Sunday, Oct. 1, at 3:30 p.m.

The film festival features an acclaimed line-up of short movies this year ranging in genre from historical dramas to crime thrillers. “Do No Harm” sees a Chinese doctor question her Hippocratic oath after her hospital is stormed by gangsters. A Nazi prisoner grapples with daily life-and-death dangers while giving haircuts in “Hope Dies Last.” And in “Perfect Day,” David’s expectations for a major business deal and a promising date go quickly awry. Hailing from more than a half-dozen countries, the 10 films in the 2017 film festival explore a variety of tonal and narrative spaces.

Attendees will have the opportunity to vote for their favorite entries. Just keep in mind that some films are adult-themed and not appropriate for children.