Fire season at our doorstep

That June, while we were away in Colorado on wildland fire assignments, it rained five inches in Sandpoint. We returned home one evening, late in the month, riding in on the final breath of a departing storm. Fog cloaked a placid sea of oxeye daisies, and we sailed across it with windows down, the cool, moist air a balm on our skin. Reentry was magic, a welcome refuge after weeks in Colorado’s damning and desiccating heat.

As we wound our way through pockets of mist on the final stretch home, we felt fortunate to live in a place that would not soon succumb to what we had just seen. It’s been over a century since North Idaho burned big. Thank goodness for our snowy winters and rainy Junes. Thank goodness for damp and summer dew, shaded carpets of moss and ferns. 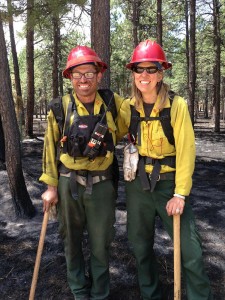 The author and her husband pose amidst the aftermath of the Black Forest Fire in Colorado. Photo by author.

Fast-forward several years. We’ve not had a snowy winter, nor a rainy June. The ferns are stunted in a stifling shade. On our property, the oxeye daisies wilt under clouds of dust that the logging trucks kick up as they barrel down the road. This feels like it could be the year. We recall our past experiences on fires elsewhere, and we are worried.

However, we seem to be alone in our fears. Aside from Ben Olson’s June 11 article in this publication, no one is talking much about fire season. Are we overreacting? Perhaps we are too sensitive to a threat that has been reality in our work elsewhere. Yet, with an insufferable heat wave upon us—and the specter of Fourth of July fireworks looming—I don’t think worry is unwarranted. Forget barbecues and swimming; this weekend, we are creating more defensible space on the wooded acreage around our wooden home. God bless the American-made Stihl chainsaw.

Our anxieties are rooted in experience, in memory. My husband has been involved in fire for over a decade, and though I am still new to the wildland world, I’ve seen enough to inform my fears. My first fire assignment was that June in Colorado. My first fire was Black Forest, the most devastating conflagration in state history, consuming nearly 500 homes, 14,000 acres and two residents. It was not a burn on some distant peak, making for hazy days and stunning sunsets, threatening only trees and those homes at the furthest reaches of the road. This fire ripped through the heart of a community. It began in the ponderosa stand that lent the neighborhood its name and charm, swallowing homes whole as it spread from there.

One of our tasks was to mop up after the fire had run its course. We walked through forests of blackened pine that segued into people’s backyards, looking for errant tendrils of smoke signifying a pocket of embers beneath the ash. At times, it felt like we were in an apocalyptic wilderness, while other moments found us intimately entrenched in the living space of strangers.

In fires like this, where the wild meets the urban, flames lay people’s personal lives bare. With residents evacuated, we were free to wander from yard to yard. We dug up smoldering roots as we observed lives on hold: the umbrella over the patio table to shade a picnic (airborne embers having seared small holes in the nylon), water bowls full for pets now absent (an ashy film covering the contents), children’s toys strewn about  (some still functional, some not), marijuana plants hidden among tomatoes (one engine crew did a remarkable job of saving the structure and the then-illicit garden, even watering the plants). We fed frightened chickens and avoided territorial peacocks. We made inferences about residents based on their belongings and were often proved right when we met them upon their return home. The family growing weed fed us killer fish tacos. 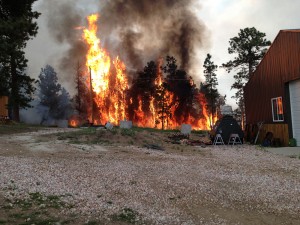 Flames race up a hillside surrounded by homes on the High Park Fire. Photo by the author.

As we exceed 100 degrees today (with an RH dipping below 20 for all you fire geeks out there), I find myself surveying our tiny kingdom: the garden guarded by a totem pole scored at the Colburn dump, the sign declaring this to be Tyjenistan (the sovereign nation of Ty and Jen), prayer flags and laundry hanging amongst the cedars, a ten-foot-high deck adorned with beehives, the unfinished log-cabin that aspires to be a primo poultry penthouse…if only we could ever finish it. In this way, we stake claim to our land, with constructs of personality and whimsy. In this way, we create a sense of home.

If an engine crew must make the turn down our drive, what will they think of us? Will they treat our property and home with care? Will they deem it defensible and worth their time? Strange to think that the fate of our sanctuary could be left up to young men (because that’s largely the firefighting demographic) whom we will never meet. Or maybe the flames will decide. The fire world is a juxtaposition of playing god and then supplicant to an immense force only slightly within our control.

I look out the window, and I am convinced of the worth of this patch of land, convinced that Tyjenistan will not yet be vanquished. Our elder statesmen —the hundred-year-old hemlocks circling us—will prevail. However, I’m also reminded that, in the face of fire, our five acres isn’t distinct from the dense, dog-hair forest surrounding us. We are not special. We are not safe. In the face of fire, we are a dot on a map, an assignment, footnote to a tactic, a source of conversation amongst crewmembers. In the face of fire, Tyjenistan’s future walks a tightrope in the tug-o-war between fate and firefighters.

This, the summer of 2015, bears many similarities to 1910, the year of the Big Burn. In two days that summer, three million acres in North Idaho, Washington and Montana were destroyed. The region experienced an exceptionally dry spring and summer then, with fires already popping up in April of that year. The same is true for us this year. The tipping point in 1910 was a wind event that caused numerous manageable spot fires to merge into one enormous conflagration. Winds were in excess of 70 miles per hour. We experienced two such windstorms last summer.

Perhaps I am crying wolf. Rains may rescue us. There may not be any carelessness with fireworks, guns or burn piles. Wind may not come. Yet, when I think of how many of us here have pinned an existence to the floor of an overgrown forest, I can’t help but think of the 500 homes erased from the map in Black Forest, Colorado. Each home was large in the hearts of its owners but insignificant in the wind and flames.

This summer, my husband will head out for fires without me; our seven-month-old daughter requires my attention at home. We do not know where he will be called or when, but our 3,000-gallon water tender will go with him when he leaves. I feel vulnerable facing a fire season without our trusty truck and all its trappings. I feel vulnerable being the one who waits for the fire story to play out rather than being a player in its unfolding. I feel vulnerable thinking that this fire season may hit very close to home.