New Year’s Eve proved a busy one for Selkirk Fire, Rescue and EMS firefighters, who responded Monday morning to a fire at Cycle Haus, located west of Sandpoint off Highway 2. 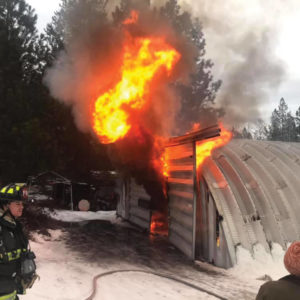 Selkirk Fire, Rescue and EMS received a report of the fire around 7:40 a.m. from the building owner, with the first engine arriving on the scene within five minutes. The building was already caught in a significant blaze with heavy smoke, and it took 14 firefighters about an hour to contain it. The winter weather also introduced its own challenges.

“It was cold,” said Selkirk Fire, Rescue and EMS Fire Chief Ron Stocking. “Other than that it went really well, and we were thankful that our other responding partners in the county were available to help assist.”

According to Stocking, a large amount of flammable items in the cycle shop served as an accelerant, quickly building to a highly destructive fire. By the time firefighters finished their work, the structure was judged a total loss with between $200,000 and $250,000 in damages, Stocking said.

Stocking said a state fire marshal investigated the fire and ruled it an accident. The owner believes his insurance will help cover the loss, Stocking added.

“Any time you have a fire, it has a devastating effect on the owners of the business, especially around the holidays,” he said.