County Clerk Mike Rosedale underscored the point that the new poll books don’t mean anything will change with voting — residents will still cast their votes on paper, but each voter’s information will now be kept on digital tablets rather than in cumbersome paper poll books. 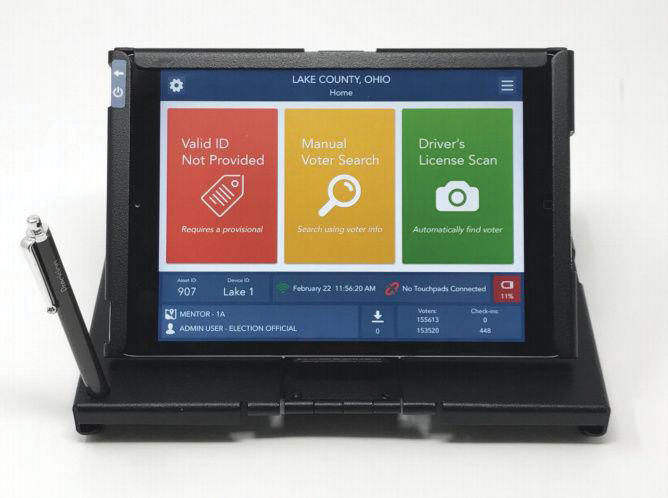 An example of a digital poll book. Courtesy photo.

“It’s not electronic voting,” he told the commissioners Sept. 8. “It’s an electronic version … of the paper stack of stuff telling us whether somebody can vote here or there.”

Rosedale said the 80 new poll books will cost a total of $78,145 — including software, hardware, accessories, annual maintenance support, cables, 80 thermal bluetooth printers, hard-shell carrying cases and a charging cart that can charge 75 of the devices at a time.

The purchase will come out of a $138,000 grant allocated to the county from the Help America Vote Act, along with a $36,000 county match.

The poll books are capable of scanning voters’ driver’s licenses to pull up information on their designated precinct, affiliation and whether they’ve already voted. The database on each device will automatically update every five minutes based on new information added to the Idaho secretary of state’s website, where voter data for every registered Idahoan is kept.

During the Sept. 8 commissioner meeting, Bonner County resident Doug Paterson questioned whether a “third party” would be in control of the county’s voting system. It’s a sentiment that Rep. Heather Scott, R-Blanchard, also brought up during the special legislative session Aug. 25 when digital poll books were discussed in the House as a means of ensuring better security in Idaho’s elections.

When Scott asked whether there were “any strings attached with getting those polling books,” Ada County Clerk Phil McGrane told her there weren’t any of which he was aware.

Rosedale went one step further in his response to Paterson, reassuring him that voter information stayed between the county and the secretary of state, with the help of Tenex’s direct line between county and state software.

“Nobody else touches our county equipment,” he said. “Just Bonner County.”