Few things empower a person like being given the tools and confidence to tell their story.

The Johnson-O’Malley film program strives to do just that by teaming up with Holt Hamilton Films to help Native American students from the Jicarilla Apache Nation in New Mexico become bonafide writers, directors and producers of their very own films. 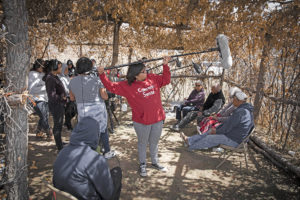 The film program, which has been in place for four years, is the focus of the recently released Holt Hamilton Films documentary emPOWERed, which will screen Thursday, Sept. 19-Sunday, Sept. 22 at the Panida Theater.

Holt Hamilton partnered with teachers in Jicarilla Apache schools to teach students to use camera, sound and editing equipment in order to make a film from start to finish. Those original stories were then showcased in a student film festival — a process chronicled in emPOWERed.

“It turned those youth around. The ones that are real quiet — soon they’re outgoing, and pretty soon it’s making a difference in their lives,” said program director Lynn Roanhorse in the official documentary trailer. “It makes them feel like they’re a part of something — something very powerful.”

Patricia Walker, executive director of the Panida, said film programs like the one utilized by Jicarilla Apache Nation schools and highlighted in emPOWERed help young people “find a voice.”

“Empowering our youth benefits us all, and it’s great to be able to show a film highlighting this in our Native American youth,” she said.

The documentary culminates by showing a few of the films the students in the Johnson-O’Malley program created.

“The kids were so proud. They were beaming,” Roanhorse said in the trailer, referring to the event at which the kids originally shared their films with the broader community. “Native communities that want to do this — you can do it. We have to invest in them and this is a good way to do it.”