Despite challenges, Ali Baranski and Amy Bistline say the show will go on

The first time Ali Baranski experienced The Festival at Sandpoint, much less Sandpoint itself, she was crossing the Long Bridge to attend a Michael Franti show in 2010. She’d flown in from Oregon to see her now-husband’s hometown and, as it soon became clear, Sandpoint would become her hometown, too. 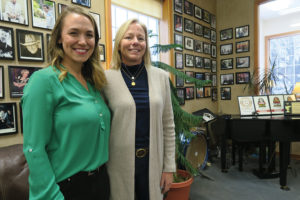 “We kind of consider that our first date,” she said.

In the interim, Baranski and her husband, Conor, a Sandpoint native, have established their family here — she works remotely, managing a corporate sales team; he teaches history and coaches soccer at Sandpoint High School; they have two young kids, a 2-year-old and an infant.

In addition to all that, Baranski is now the interim executive director of The Festival at Sandpoint, which she’s served as a board member for a year and a half.

Roughly a quarter of that time, however, has seen the nonprofit navigate the most tumult in its 37 years.

First came the drunk driving arrest of longtime Festival Executive Director Diana “Dyno” Wahl on the closing night of the 2019 season, then the announcement of her removal from the position — which she’d held for 21 years — 10 days later on Aug. 21. The paid administrative staff for the nonprofit subsequently quit, leaving the board to step in and steer the operation.

Amid that furor came a challenge to The Festival’s ban on firearms at War Memorial Field, which the nonprofit leases from the city of Sandpoint for two weeks each August. Pushback on the gun ban quickly morphed into a lawsuit between Bonner County and the city, with the former alleging the no-weapons policy violates state statute and the latter arguing the lease means The Festival can put in place any security protocols it deems necessary.

Finally, as the city moved forward with its Parks and Rec Master Plan through the summer and fall, it became apparent that Memorial Field would undergo major changes, chief among them resurfacing with artificial turf. The turf design, which immediately drew widespread controversy following its approval by the City Council in a tie-vote split by Mayor Shelby Rognstad in October, also raised big hurdles for The Festival, which has always set up on natural grass.

Asked how the board has been navigating the near-constant challenges presented in recent months, Baranski said, “We’re kind of having to compartmentalize. You come in here to work on one project and something else happens to pull you away.”

Regardless, she added, customer service has been at the forefront of the organization’s priorities, as “the rumor mill hasn’t been in our favor lately.”

If the city loses the gun ban lawsuit and the concert series is required to allow firearms into the venue, Festival organizers say they won’t be able to book artists whose contracts stipulate gun-free performance spaces. Meanwhile, many fear that either because of logistics or construction delays, the Memorial Field project will make it impossible for The Festival to be set up in time to meet its schedule obligations — or at all.

As for the lawsuit, Baranski said the organization sees a “high likelihood” that the legal wrangling will drag on past the 2020 season. A status conference had been scheduled in the case for Nov. 26, but because the judge fell ill it was postponed until Jan. 28, 2020.

“We don’t see it affecting the 2020 Festival,” she said. “That’s our mode right now. We’re moving forward with booking the acts,” which this year will be accomplished through a booking agent rather than the executive director.

“There’s a lot of unknowns right now and [booking acts] can’t be one of them,” Baranski added.

Regarding unknowns, now-interim Office Manager Amy Bistline, who had served as a board member for three years including a recent stint as secretary, said The Festival hasn’t even been added to the gun ban lawsuit yet — an action required by its lease to “indemnify and defend” the city in the case of a legal challenge.

“That’s been the case since the beginning,” said Bistline, who has practiced law for 15 years and has offices in Coeur d’Alene and Sandpoint.

She added that The Festival has filed a motion to intervene — to which the city has agreed — though the county has yet to respond to that motion. It’s unclear when a judge may be able to make the decision whether to add The Festival to the lawsuit.

While there is a lot of uncertainty, Baranski and Bistline agreed that the 2020 Festival will go on, regardless of the court action.

Of more immediate concern is the status of Memorial Field. Baranski said engineering plans stipulate four months for completion — one month longer than typical for such a project — and a performance bond will be in place with the contractor, guaranteeing that if work goes off schedule and the field isn’t ready by its July 30 target date, at least The Festival will be able to cover its costs.

That said, Baranski added, “we’re continuing to look for different venues” in the event that the project doesn’t come off in time. Should that happen early in the project timeline, relocation might be possible. In the worst-case scenario, if work slows later in the schedule, The Festival could find itself in a position where it doesn’t have enough time to arrange for a new location.

“There’s a good chance that we wouldn’t survive that,” she said.

Yet, both Baranski and Bistline are heartened that Production Manager Paul Gunter remains on board after 20 years of involvement with the event, as well as the role of longtime former-Production Manager Dave Nygren, who is advising the city and its contractors on The Festival’s logistical needs.

“The city is committed to The Festival,” Bistline said, “and they’re going to do whatever they can to get it ready in time.”

Asked if she was “cautiously optimistic” that the field would be ready in time, Bistline responded, “optimistic. We’re having a Festival.”

Baranski added, “The Festival at Sandpoint might not look and feel the same [with the turf surface] but it will still be recognizable.”

With a degree in exercise sports science from Oregon State University, she should know.

“The technology has gotten a lot better,” Baranski said. “It is better than I thought. I think the infill [granules of material between the artificial grass] is the biggest thing people will notice.”

Looking forward, half of all 2020 season passes have already been sold — even after delaying the start of sales by a month amid uncertainty over the Memorial Field turf decision. For comparison, Baranski said, last year The Festival sold 60% of passes in the two months after they went on sale.

“We’ve gotten some great support from our sponsors,” she said, including interest from would-be volunteers and those wanting to apply for board membership. “I think a big part of why The Festival gets so much press — good or bad — is because it’s so important to the community.”

It’s clearly important to the board, as well, which has weathered an undeniably contentious season.

“We’ve all become very close as a board,” Baranski said, noting that through the summer and fall, members have volunteered “thousands of hours” to answering phones, selling season passes and generally keeping the office running. “It’s a really talented group with lots of diverse backgrounds.”

A posting for permanent executive director is expected after New Year’s, and whoever gets the job will be tasked with building the staff — in collaboration with the board, of course.

“It’s important for the board to know how everything works,” said Bistline. “Boards need to do more of that. [And] some people don’t realize that it’s cranking away.”

The Festival at Sandpoint will host its annual membership meeting at 5:30 p.m., Tuesday, Dec. 10 at MicDuff’s Beer Hall, 220 Cedar St., during which board members will be on hand and Baranski will offer an overview of Festival operations. The event is free and open to the public, with MickDuff’s donating $2.50 of every regular-price beer to The Festival.