Saying goodbye is always hard to do, but for Lilly Mitsui, it’s part of raising puppies.

For a year-and-a-half, Mitsui has raised Falcon for Canine Companions, a nationwide company that specializes in providing service dogs for people with a variety of needs. The affable Labrador retriever, golden retriever mix was assigned to Mitsui at just eight weeks old. In their time together, Mitsui is nearing completion of the first stage of training for service animals; she has taught him over 25 commands, basic obedience, as well as indoctrinating him to accept a variety of social situations. 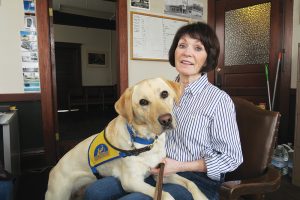 Falcon poses with puppy trainer Lilly Mitsui, who has raised him for close to 16 months. Photo by Ben Olson.

This is the third puppy Mitsui has raised for Canine Companions. Usually, after 18 to 20 months, puppies will have completed their first stage of training and be sent to the facility in Santa Rosa, Calif., to complete their final training with professionals. Think of it as doggie “graduate school.” The budding service animals learn valuable skills like turning light switches on and off, opening drawers and refrigerators, as well as getting clothes out of the dryer.

After a successful six-months of training, the service animals are then matched up to an appropriate owner for no cost.

For Mitsui, the work she has done raising Falcon for the first stage has been incredibly rewarding, but also bittersweet when she has to give him up.

“He’s a really sweet dog who really wants to please,” she said. “I’m very attached to him, which happens. It’ll be hard for a few weeks.”

Mitsui and her husband will embark on Falcon’s journey to graduate school on Tuesday, May 2. Once there, they will face the difficult task of giving up the dog that has shared their home for 16 months, but Mitsui said the benefits outweigh any sad feelings.

“You get used to it,” she said. “This is the third dog I’ve raised, and we all go through having to give them up. It will hurt, but it’s such a worthy thing to do.”

Mitsui said working as a puppy raiser for Canine Companions is the ultimate way to give back to those who are in need.

“I’m looking for other people to help as puppy raisers in this area,” she said. “I want to spread the word that people can volunteer for this great organization and get so much out of it. I also want let disabled people know that these dogs are available.”

After both stages of training, the dogs are valued at $50,000 each, but they are given to their new disabled owners for free. Since 1975, Canine Companions has placed 5,275 dogs into the hands of those who need their services. Last year, a record number of dogs were placed: 366. Mitsui is proud to be the only puppy raiser in Bonner County but eagerly wants others to take part in this program.

“Without puppy raisers, you don’t have service dogs,” she said, “so I’d love to find more puppy raisers in this area. Businesses can sponsor a puppy or contribute to the training. It also makes an awesome project for a senior in high school or a church project.”

The most important part of the first stage of training is to raise the dog with a calm demeanor and teach them that they are “working” when their vests are on.

“Whenever he has his vest on, he’s working,” said Mitsui. “At home, when the vest comes off, he gets to play.”

While it’s difficult to resist the temptation to pet a service animal, Mitsui noted that while they are working, it’s best not to offer, since service animals are supposed to pay attention to their owners’ needs and not be distracted.

Mitsui said if anyone is interested in more information about how to raise service dogs as puppies, they can contact her at  [email protected] You can also check out Canine Companions at www.CCI.org.

For now, Mitsui is relishing her final two weeks with Falcon before he attends graduate school.

“It hurts like crazy when you get close,” she said. “It’s a little painful when you turn in the dog, but it makes it all worth while because I actually get to present him to his new family when he completes training. Oftentimes, his new family wants to stay in contact, too.”

When asked if they would entertain raising a fourth puppy in the future, Mitsui looked at her husband knowingly and said, “We’ll see. We have to talk about it. You can change somebody’s life raising these puppies. We’ll see.”

A past graduate from Canine Companions

While Falcon prepares to enter his final stages of training (see story at left on page 14), one Sandpoint’s more beloved canines happily holds onto his position as the only facility dog from Canine Companions in Bonner County.

Meet Ken, a black lab/golden retriever mix who holds the very official title of courthouse facility dog. Ken’s main duties are to be on hand for victims of abuse; most of them children. 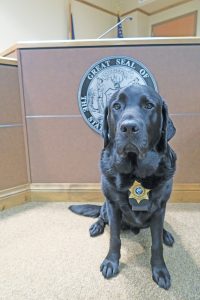 Ken poses in court, where is he often utilized in helping young victims of abuse to feel more at ease while dealing with traumatic events.
Photo by Ben Olson.

“My job changed for the better when we got Ken,” said Frye. “It’s like night and day.”

A few years back, Frye saw a video extolling the virtues of a courthouse facility dog. Since her job deals with a lot of underage victims of physical and sexual abuse, Frye was looking for a way to help her them feel more comfortable during tense meetings and conversations about traumatic events.

“I stuck the video on [Prosecutor] Louis [Marshall]’s desk and asked what he thought,” said Frye. “Two minutes after he watched the video, he was in.”

Frye said bringing Ken on board took a lot of research and preparation. She applied for a facility dog through Canine Companions and was put on a waiting list until August 2015 when Ken was introduced to his new career: helping children.

“To be a facility dog, it has to be the kind of dog that loves people,” said Frye. “Ken loves people, especially kids. He was perfect.”

Frye said Ken provides a calming, light presence in the midst of traumatic issues and cases.

“Say a child needs to make a disclosure about abuse,” said Frye. “It begins as a scary, serious situation, but when Ken comes in the room, he’s this big goofy dog wagging his tail and making everyone feel better.”

Frye said in Ken’s first case, involving a victim of a home invasion and robbery where the perpetrator of the crime was actually a wanted murderer, Ken immediately earned his dog kibble.

“The teenage daughter of the parents who were robbed was really angry about the home invasion,” said Frye. “While she was talking, Ken came in and sat by her feet, which is what he normally does. She petted him and told me it helped her feel less angry with Ken by her side.”

In another situation, a 7-year-old who was molested by a family friend were scared and nervous about testifying. Frye let them walk Ken to the courthouse and just interacting with him was enough so that the victim actually made additional disclosures on the stand, which is rare.

Frye said that Ken is very much a beloved office dog. While not working, he loves to lie on his side and snooze. Every morning he makes his rounds around the office to say hello to each employee. At home, he loves to swim and chase tennis balls.

“He’s just a big goofball,” said Frye, “But he loves to cuddle and when he wags his tail, his whole hind end moves around like crazy.”

“My position has a high burnout rate,” she said. “Ken boosts morale around the office. Basically this is Ken’s house. When you have a bad decision made in court or are just having a tough day in the system, it’s so nice to shake it off with Ken. He doesn’t care. He’s here for you.”