When local veteran James Livingston suggested a drop box of some kind where people could leave worn U.S. flags that needed retiring, a 15-year-old Sandpoint High School student took up the challenge. William Dotson with Troop No. 308 received approval from his troop to build these boxes for his Eagle Scout project and got to work.

Dotson was tasked with finding a location for the boxes, raising funds to build them and overseeing the completion of the project.

To generate funds for the project, Dotson first made custom corn hole game sets, with some help from his father as well as other members of his troop. Thanks to additional support from James and Marie Bayles from MakerPoint Studios, many of the boards were able to feature elaborate logos. In all, Dotson made 55 custom corn hold boards that sold for $100 to $180 each. They were all beautifully made, featuring unique designs that cater to any taste.

Dotson said he was “impressed with how many people bought boards just to contribute to the Eagle project. The community was very interested in the flag drop.” 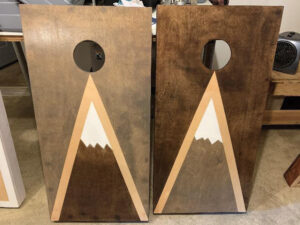 One of the 55 cornhole sets Dotson made to fund the flag drop box project. Courtesy photo.

Now, community members can drop off their worn flags so they may be properly retired. The flags collected in the drop box will be retired by local scout troops and veterans. Troop No. 308 joined Troop No. 141 recently at Camp Stidwell and retired dozens of flags, including the recently replaced giant flag from Sandpoint’s Super One grocery store.