‘God of War’ finds poignancy in its mythic spectacle 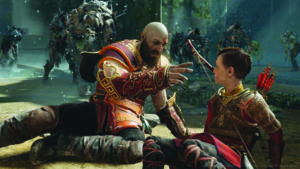 The latest entry in a series that began in 2005, “God of War” (2018) retains the earlier titles’ penchant for spectacle, larger-than-life action and technological virtuosity. What it adds is less tangible but arguably more valuable: thoughtfulness, maturity and a true sense of empathy.

Earlier “God of War” games weren’t bad — far from it. They offered tight gameplay, rewarding exploration and a visual presentation that pushed the Playstation 2 and 3 to their limits. But their narratives were shallow, favoring short-term shocks and superficial twists over meaningful characterization or thematic exploration. At the center was protagonist Kratos, the titular god of war, who operated on one note throughout the original game trilogy: single-minded rage. The result was a well-crafted but ultimately juvenile power fantasy preoccupied with female nudity and gory ultraviolence.

This year, something amazing happened: “God of War” grew up.

Taking place many years after the original trilogy, the story finds an older and wiser Kratos hiding from his bloody past in the Norse wilderness. He has a preteen son, Atreus, and a wife, Faye — or at least, he did, until she passed away shortly before the story’s opening. In the game’s first moments, the father and son mourn their loss and resolve to honor her final wish: to have her ashes scattered from the tallest mountain within the Nine Realms of Norse mythology. But as they begin their journey, it becomes clear the Norse pantheon has taken notice of the foreign gods hiding in their lands.

The theme of family, particularly the relationship between parents and their children, runs deep through “God of War.” The game takes pains to develop Kratos and Atreus as believable characters both in their own right and in their connection to each other. While Atreus seeks to prove his capabilities to his father and to himself, Kratos is a wary, overly-severe guardian terrified that his son will repeat the mistakes he made in his youth. Their relationship is the backbone that supports all other narrative elements, building to a deeply poignant climax in the final hours.

That father-son theme carries over into “God of War’s” gameplay. Whether they’re exploring the Norse world, solving cleverly-designed puzzles or battling the many mythological creatures they encounter, Kratos and Atreus rely on and complement each other at a fundamental level. Even small moments, like Atreus seeking his father’s praise after a tough battle, feel organic, and Kratos’ gradual transition from distant, disapproving parent to tender caregiver is the journey’s affecting throughline.

“God of War” is many things: a visceral action game, a wonder of video-game graphics and art direction, a window into a fantastic world, a personal story told with grace and sensitivity. But most importantly, it’s proof that even well-established, big-budget franchises can take risks and aspire to artistic relevance. With the video- game industry in the midst of an identity crisis — are games an entertainment product or a medium for creative expression? — “God of War” shows they can be both at once.

Cameron Rasmusson is a lifelong game enthusiast, writer and editor of the Sandpoint Reader.