Does Mike Pence have the patience of Job? 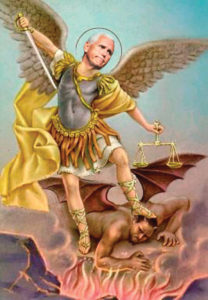 I the Lord do all these things.”

I’ve been studying the Book of Job for clues about the relationship between Donald Trump and Mike Pence. Many conservative Christians believe that God has sent Trump to save the nation, so I’m re-telling the story with this foremost in mind.

Trump Makes a Wager with God

Trump: “If you rig the 2016 election for me and make Pence my vice-president, I’m certain that I can make him just as corrupt as I am.” God replies: “I don’t think you will succeed, but I empower you and place my Good Michael in your hands.” Trump is so sure of his wager that he bets Trump Tower and Mar-a-Lago.

God hardened the hearts of many in Wisconsin, Michigan, and Pennsylvania against Hillary and the election goes to Trump and Pence in the Electoral College. (God doesn’t care about the popular vote.) Here are excerpts from their first post-election meeting:

Good Michael Complains to his Wife

The Good Michael is so stressed in his job that boils break out all over his body. He shares his frustrations with his wife: “Trump mocks me when I ask the staff to pray; he refuses to join the White House Bible daily studies; he uses the F-word and takes the Lord’s name in vain; he undermines my attempts t o help Congress pass legislation; and he made us have lunch with the gay prime minister of Ireland. He stands against everything that we believe.”

Michael’s wife answers as Job’s unnamed spouse does: “Do you still hold fast your integrity? Curse God and die” (2:9). The not-so good Michael replies as Job does: “You speak as one of the foolish women speaks.” Instead of cursing God, Michael laments the day he was born.

Michael’s three best biblical friends—Eliphaz, Bildad, and Zophar—come to comfort him. Michael reminds them that he is the most righteous man in the land, and he boasts that he would never have lunch with a woman unless his wife is present. He insists that he does not deserve this shame and humiliation.

Eliphaz replies: “Should a wise man utter vain knowledge, and fill his belly with the east wind? For thy own mouth uttereth thine iniquity. Thine own mouth condemneth thee”(15:2, 5, 6). Michael then rends his suit and covers himself in ashes.

Trump Responds out of a Whirlwind

God hears Michael’s complaints, wants to respond, but he is too busy smiting evil doers. God had already anointed Trump as America’s Messiah, so he deputizes Trump to answer Pence’s complaints. Trump responds out of a whirlwind (chap. 38), made more intense by climate change. With a roar Trump declares: “Gird up your loins like a man, I will question you, and you shall declare to me” (v. 3).

Good Michael Gets His Rewards

Trump reminds Michael that it is God, not he, who is the cause of all his miseries (42:11), but God is now ready to reward his loyalty handsomely: he will receive 14,000 sheep, 6,000 camels, 2,000 oxen, and 1,000 she asses (42:12). When Michael asked where he could possibly to put all these animals, Trump answers: “There is lots of pasture land in Indiana where you come from. By the way, you are being replaced on the 2020 ticket by either Sergey Lavrov or Sergey Kislyak—I can’t decide.”

God’s final reward is to grant Michael’s wife 10 more children. When Michael responds that he will have to ask her, Trump cuts him off: “She will obey”! And when Michael says that she might be too old, Trump reminds him: “Did not God make Sarah conceive in Two Corinthians? And besides, we need many more white children to make the American Reich great again.”

Lady Wisdom, described as God’s “delight” and as co-creator (Proverbs 8:30), assumes her rightful place in Heaven, as she does asShekinah in the Jewish Kabbalah and in Hinduism. She consigns Trump to Sheol (Job 7:9), and she sends Michael back to Indiana to take care of all his animals. She assigns those Republicans defeated in the 2018 to help Michael with this huge task, because Old Testament farmers, including the young David, are presumably their heroes.

Lady Wisdom repossesses Trump Tower and opens its doors to refugees with a preference for Syrians. The rooms at Mar-a-Lago are reserved for Central American families seeking asylum, and the golf course is opened to the public at nominal fees. The rest of Trump’s properties around the world are nationalized and repurposed for public use.

The Goddess rescinds Trump’s command that Michael’s wife have ten more children, and she makes sure that the constant attack on women’s reproductive rights comes to an end. She supports Ivanka Trump’s efforts to legislate federal maternity leaves, but makes sure that it is extended to three months and is fully funded. Finally, she commits herself to progressive politicians around the world who are campaigning to overcome centuries years of patriarchal rule.