Brenton Watson was six when he began playing “Magic: The Gathering.” Today, after 23 years, the game is more popular than ever. There are over 20 million collectors and players of “Magic” cards and it is printed in 11 languages. There are over 15,000 unique cards with hundreds of new ones printed each year. The images on these cards are fine art, and some of them are absolutely stunning.

Watson is the co-owner of “Another World,” located at 417 Church St., and claims that “Magic” is his “bread and butter.” I can understand this. My husband and my sons have a coffee table mounded with boxes of “Magic” cards, but they are thrilled to open a new pack. Another World sells “Magic: the Gathering” booster packs, containing 15 cards, for $2.99 a pack (which undercuts Walmart by a buck). When the player creates their own unique “Magic” deck (around 60 cards) they can play in multiple scheduled tournaments or spontaneous pick-up games. 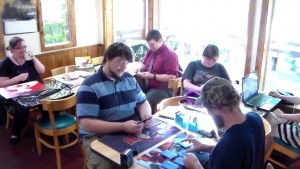 Brenton Watson (in stripes) begins a Magic game, while new decks and fantasy art are created around him. Photos by Jodi Rawson.

“Magic” is “a strategy-based card game built on mathematics—it teaches players to think with both creativity and logic simultaneously, to solve problems,” says co-owner Jeff Halligan.

Last year my husband checked out a room at the library for a maximum of an hour and half, inviting “Magic” players. At the end of their session, there were usually six to 10 guys laughing, trading cards, chatting about the last game—not at all ready retire, when their room was needed by a new group.

Around this time, Watson and his friends opened Another World (across from Dub’s at the time) and locals celebrated. Their own circle of “Magic” players, combined with the Library “Magic” players, and an influx of new players, resembled sardines in that little shop, but everyone was thrilled to have real Friday Night “Magic” in Sandpoint. Their new location is spacious, with plenty of tables, a bathroom and a kitchen. Presently, pizza delivery and coffee sustain these players, but Watson aims to open the kitchen to feed his friends.

“See Caleb here,” he explains, pointing to the person holding a stack of “Magic” cards he just won in the tournament.“He stomped me the first time I played him, but I respect him. I consider him a friend.” The competition is thick, but the mood is light, and no one is sulking over a loss.

Some Saturdays are dedicated to the “pre-release” of a new set of Magic Cards. The last pre-release was for “Eldritch Moon,” at midnight, July 16. This is a “sealed-deck tournament,” meaning that you open the new set (six booster packs) and make your deck right then and there, before the first round. Twenty-eight guys were entered into this all night tournament, lasting until 6 a.m. In order to have these events,  Another World is sanctioned through the “Wizards Network” meaning no alcohol or drugs can be on the premises, lest they lose their license. 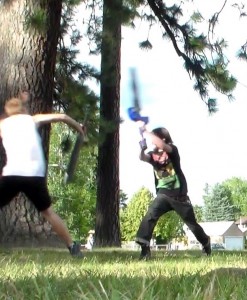 Watson is also a Dungeon Master (a story-teller), leading an ongoing quest for his fantasy-driven friends. “Dungeons and Dragons” is played on Tuesdays, Thursdays, and the occasional Saturday. “War Machine” is another popular game, played on Wednesdays, resembling a modern, more expansive, chess.

Another World specializes in tabletop games which are both old-school and timeless. There are five co-owner friends invested to fill the need for “community growth and interaction,” says Watson. If you want to play, learn or watch, loiterers are welcome!

Every tabletop gamer needs exercise, so on Tuesdays at 6 p.m., they meet at Lakeview Park for foam sword fighting. Don’t let the picture scare you. These wizards are kind, welcoming and peaceful. If you need any help diving into one of these games, they are great teachers. Ask them about custom orders for games and fantasy paraphernalia, they get next-day shipping.

Enter “Another World” for challenge, friendship, and adventurous evenings, Monday through Saturday, from 3–11 p.m.