‘Death’ comes back to life

Editor’s Note: This play was written by Ben Olson, who is co-owner and publisher of the Sandpoint Reader. He is shamelessly using this newspaper to promote his play. Shame, shame.

In the nearly eight years since “Death of a Small Town in the West” saw a stage, playwright Ben Olson has grown older, wiser and possibly even more likely to wield a pitchfork if someone poses a serious threat to the unique little town that is Sandpoint.

“The fact of the matter is that people live in Sandpoint, they love the fact that it is Sandpoint,” he said. “It has its own character, and this play speaks to that in a very absurd way.” 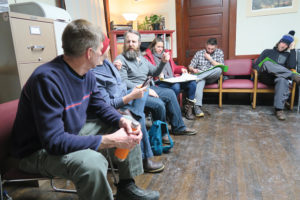 Some of the cast of Olson’s “Death of a Small Town in the West” working on their lines during rehearsal.
Photo by Ben Olson.

“Absurdity” is a word that Olson, director Madeline Elliott and co-writer Chris Herron all use pretty freely to describe the play.

“People should be surprised that they’re laughing at this stuff,” Olson said. “It’s my way of poking fun and poking the hornet’s nest.”

“Death” is the story of a town under threat of extreme change — that town being Sandpoint — as a developer attempts to level the town and rebuild in his own image.

“You really are forcing people to root for domestic terrorism,” Herron said, laughing. “If somebody actually looks at it that way, they could have a weird moral dilemma. Is it the resistance, or is it terror? All it’s missing is space and a princess and it could be ‘Star Wars’.”

While Olson said the upcoming shows will follow the original script pretty closely, there is a fair amount inspired by recent Sandpoint happenings — the two-way streets, for instance, become ammo for comedic use.

Olson said he’s bringing back “Death” because while his creative writing has taken a backseat in recent years, he liked the idea of putting on another play. Elliott and Herron, founders of local production company Unknown Locals, became involved at Olson’s request.

Though Elliott wasn’t around for the first production of “Death,” she said she was excited for the opportunity to work on a “Ben Olson play.”

Though Olson noted that certain things have changed in Sandpoint over the last decade, they haven’t changed so much as to make “Death” irrelevant.

“The fact that this play can almost seamlessly be produced 10 years later is a testament to the fact that things don’t change that much, including change,” Olson said.

The cast will feature active local theater figures like Kate McAlister and Eric Bond, as well as many others that Elliott, Herron and Olson are all excited to have involved.

“We’ve ended up with a really dynamic cast,” Elliott said. “They’re bringing a lot to it.”

“Death of a Small Town in the West” will show four nights, Jan. 26 and 27, as well as Feb. 2 and 3. All shows are at 7 p.m. and doors open half an hour before. Tickets are available at Eve’s Leaves, Eichardt’s and online at www.panida.org ahead of time, or at the door. Advance tickets are $10 while door tickets are $12. Part of the proceeds from “Death” will support the Unknown Locals and the Sandpoint Reader.

Olson said this play is rated R. If you choose to bring children, be prepared for some language and situations that probably aren’t kid-appropriate.