Too Darn Hot: Looking back over 70 years of Broadway musicals

Living in and around NYC for much of our pre-dotage life, my 1957 bride and I saw and fell in love with Broadway musicals.

In the late 1950s we clapped our hands and tapped our toes from high in the balconies. As time passed we edged closer to the action on stage — a benefit of earning a mind-boggling $10,000 instead of $6,500 a year.

Broadway songs infiltrated our life. Countless musicals were, and are, about New York City and that made us feel part of the scene  (Same with literature, pop songs, films — watching a Woody Allen movie that was filmed in the city is twice as much fun if you’ve walked those streets, known those cafes and coffee houses, explored Central Park, Rockefeller Center, SoHo, Little Italy, Fifth Avenue). 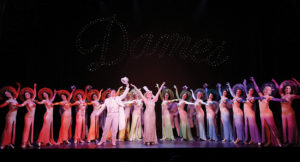 In the early ‘60s my 1957 bride and I saw the young Eli Wallach, Anne Jackson and Alan Arkin in Luv — a comedy, not a musical — cavorting at night on a staged Brooklyn Bridge. We felt like we were in the play. I mean, the actual bridge is mere blocks from Broadway, where we sat. When a bassett hound, on cue, strolled onstage and peed on Arkin’s leg — and he bellowed, “Why me, why me?”— we almost felt culpable. Could that be our bassett hound, Cruiser? Did we shut his gate when we headed into town tonight from Glen Rock, N.J., for the show? Does he know how to commute by train, then over the Hudson by ferry boat, into Manhattan?

“Annie,” “Hello Dolly,” “Funny Girl,” “Easter Parade,” “Mame,” “West Side Story,” “On The Town,” and “42nd Street” were about NYC. So were untold other productions. Few were more Manhattan-ish than George M., with such all-American hits as “You’re A Grand Old Flag,” “Harrigan,” “Yankee Doodle Dandy,” “Over There,” and “Give My Regards To Broadway.” “Damn Yankees” was about the New York Yankees. “Gentlemen Prefer Blondes” was about New York and Paris. We saw those performances and, being young, felt almost smug to be living right smack where those singers and dancers were singing and dancing about. Sort of like reading in the national media that Sandpoint is the USA’s best mountain town. A very special place. It’s reassuring. A pat on the back for a Sandpoint citizen’s superior judgment. “Hey, tourists, you vacation here — but I live here!”

When we saw the spirited revival of “Anything Goes” at a Broadway theater in the early 1980s I was wafted, not unhappily, back to 1952, to lusty youth, in Albany, Ga. With several other eager young college dropouts from Turner Air Force Base, I joined  Albany’s Junior League damsels as a cast member in their annual musical follies (no shared DNA with the Angels Over Sandpoint’s Follies. Much less titillating, if memory serves). We sang “It’s Delovely,” from “Anything Goes.” And I wound up dating a Junior League hottie. Mission accomplished.

When my 1957 bride and I saw the British blockbuster “Me And My Girl” during its 1980s New York run, I was transported back even further — to when I was a late 1930s whippersnapper. Just as flappers doing the Charleston and the Lindy characterized the roaring twenties, the Lambeth Walk was the dawn-of-World War II dance craze in the U.S. and England. To my delight they sang and danced it in the 1985 “Me And My Girl” revival in New York. And, corny as it sounds, I found myself  remembering my mom. She loved music, loved dancing, loved parties and as a young lady loved The Lambeth Walk. It was one of the first recorded songs I remember hearing on the family’s 78-RPM living room victrola, circa 1937 (another was young Bing Crosby’s “Sweet Leilani”).

The early ‘60s Kennedy administration, full of hope and promise despite his diddling everyone from a mafia moll to Marilyn Monroe, was called “Camelot,” the title of a great Broadway musical, by many millions of Americans. When we saw “The Best Little Whorehouse In Texas,” Lyndon Johnson had succeeded JFK. The show’s Stetson-wearing sheriff and his dancing good ol’ boy buddies brought LBJ to mind (Johnson, personally crude by preceding, polished Ivy League standards, was one of American history’s most accomplished leaders. The Civil Rights and Voting Rights Acts were passed on his watch, as were the Clean Air, Wilderness, and Higher Education Acts. Head Start and Food Stamps were enacted, and he expanded Social Security to include Medicare and Medicaid).

Like a number of U.S. presidents before (and since) him, Johnson considered himself a major league stud. About Jack Kennedy and his reputation as a Lothario, LBJ once declared: “I’ve gotten more by accident than he ever got on purpose.” The Best Little Whorehouse sheriff was cut from the same cloth. Maybe no coincidence.

Months before I retired from the corporate world in 1986 we saw “Big River,” a musical about Huck Finn and his pal Jim floating the Mississippi on a raft. In the early ‘70s we had lived in an Illinois farm town near the Mississippi. John Deere years. “Big River” kindled memories of small town midwest picnics, unpretentious small town friends, ice cream socials in the city park, Friday night high school football under the lights. Simple pleasures. We missed it all so much we returned there after east coast retirement. With fellow mariners of the Quad Cities Boat Club we sailed the mighty Mississippi — five knot, southbound, constant current notwithstanding. We bragged, “If you can sail a boat on the Mississippi you can sail one anywhere.” It wasn’t true, but it made us feel like better sailors than we were.

“Man Of La Mancha” left a happy imprint on us, too. We kept backyard horses during a six-year Lloyd Harbor, Long Island residency. We named one horse Dulcinea, after the female lead who made Don Quixote think his “Impossible Dream” was reachable. We called another Kate, after the Broadway blockbuster, “Kiss Me Kate.”

Which leads to the inspiration for this essay: the summer’s unrelenting heat. There is a song from Broadway’s “Kiss Me Kate” titled “It’s Too Darn Hot”: According to the Kinsey Report, every average man you know … much prefers to play his favorite sport, when the temperature is low… but when the thermometer goes way up and the weather is sizzling hot … Mr. Adam for his madam, a marine for his queen, a G.I. for his cutie pie … is not.

The guys who sang that in the show were bitching about Baltimore. But it could have been July at City Beach, hiking the Mickinnick trail, floating the Pack in a tube, or camping at Green Bay. Heavenly! But climate change is not fake news.

It’s been Too Darn Hot.