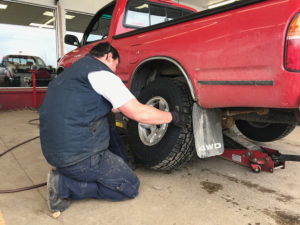 “Please remember to make sure you have winter tires on your rig and that county roads are not maintained 24 hours a day,” said Road and Bridge Director Steve Klatt in a statement. “Hopefully, this winter is not as early and persistent as last winter was.”

Road and Bridge is responsible for about 680 miles of road, and according to Klatt, winter maintenance is administered to county roadways by order of priority: First, school bus routes, arterials and major collectors are plowed; second, all other county-maintained roads are plowed; and third, sand is applied to steeper roadway grades, at intersections, on bridges and other “hazardous” areas. Klatt noted that sand is not typically applied to straight stretches of road and that the county does not use road salt.

As a note to property owners who remove snow from their driveways, Road and Bridge reiterated that Idaho law prohibits “placing snow or ice on any public road in a manner that impedes traffic or makes it unsafe,” and also “prohibits the placing of snow in any manner that affects the water flow of a ditch line.”

“If your snow plowing affects the county’s plowing or anyone driving the road, you are breaking the law,” Klatt said.

The department also provided tips for the public to help winter road maintenance go smoothly. These tips included keeping children a safe distance from snow removal operations, not parking along county roadways during snow events, keeping culverts and other drain features free of snow to avoid flooding, and removing landscape features, mailboxes or other possessions from county rights-of-way.

“We want everyone to have a safe and secure winter,” Klatt said.

Klatt also released a statement regarding what he called a “fall road grading conundrum” on Nov. 2. He said the dry last half of October prevented crews from beginning the grading process on many county roads due to lack of moisture, but thanks to the recent rains, roads are now too saturated for effective maintenance.

“Nearly every fall we encounter this conundrum in some form or fashion, but this fall looks almost perversely challenging,” Klatt said, adding that the department is keeping a close eye on the weather in case there’s an opportunity for grading. “In the meantime, our road crews are beginning to convert trucks for plowing and sanding because there are historic precedents for winter coming along soon.”