Bonner County Road and Bridge Director Steve Klatt remembers when he and the other schoolchildren of North Idaho had “mud vacation.” 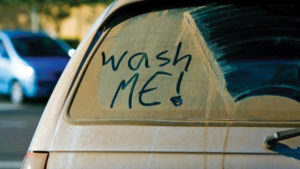 The inevitable “wash me” sign on a dusty car. Courtesy photo.

During the end of March and beginning of April, schools would need to close because roads across the county were largely impassable, Klatt said.

“Mud vacation was simply a part of spring,” he said. “Kids looked forward to it. We planned on it.”

Though mud vacations stopped around the time Klatt reached middle school, they serve as a reminder of how far the county’s road infrastructure has come in just a few decades.

The Road and Bridge department is hard at work grading gravel roads and sweeping sand from paved roads within its system. Klatt said that while every winter produces a different set of problems for county roads, the cleanup afterward is always extensive.

“There are roads that have blown up and continue to blow up,” he said, noting that some roads will need updated draining systems due to persistent water encroachment. “We’re going to continue to try to do those sorts of repairs.”

Klatt remembers the first time Bonner County utilized mag chloride. The year was 1995, and the county had just relocated a solid waste refusal site. It rerouted high traffic counts to a stretch of road near several homes, prompting the use of the new dust abatement technique. Klatt said the use of mag chloride in Bonner County has only expanded since then, and the department will apply more than a half a million dollars worth of product to the roads this year.

“It really is amazing,” he said. “Not only do you control the dust, but the surface stays intact so you don’t create the washboards and potholes.”

Looking toward summer, Klatt said only two major projects are planned: the paving of East Spring Creek Road in Clark Fork, and the hard-surface treatment on Wooded Acres Drive in Sagle.

Bonner County will pave 1.49 miles of East Spring Creek Road with the help of a grant from the Idaho Department of Environmental Quality. The county worked with the National Resource Conservation Service to secure the grant, and that organization will be helping to stabilize the banks of Lightning Creek — which runs alongside the road — throughout the project.

The Wooded Acres project is part of the county’s recently amended Locally Funded Improvements program, which enables members of the public to put up a certain percentage of material costs and have their project prioritized. The residents on Wooded Acres Drive contributed $100,000 to cover about 63% of material costs to apply bituminous surface treatment to 2.4 miles of road.

It all adds up to another busy season for Bonner County Road and Bridge, an entity that’s evolved substantially since Klatt’s mud vacations.

“I remember seeing the first sand truck I’d ever seen in Bonner County. It was a guy standing in the back of a dump truck with a shovel,” he said. “That is the background of observing six decades of Bonner County roads, so we have come a long, long way.”

Those with questions about upcoming county roadwork can reach the Road and Bridge office at 208-255-5681 ext. 1.