County candidates for commissioner, assessor take on issues at forum

Candidates for Bonner County assessor and commissioner took on the issues at a forum May 2, giving voters a chance to hear where they stand as the Tuesday, May 17 primary election quickly approaches.

The forum, sponsored by the Sandpoint Reader, sandpointonline.com and KRFY 88.5 FM, lasted about two hours in the Sandpoint High School auditorium and drew about 70 attendees. Candidates — all Republican, as there are no contested Democratic races in the local 2022 primary — were each given the chance for an opening and closing statement, and answered several questions submitted by the audience. Brief rebuttals were also allowed throughout the evening.

Tensions ran high during the District 3 race opening statement period, with commissioner candidate Rich Harter taking aim at competitor  Ron Korn for using “bumper sticker quotes” and calling out fellow candidates Brian Riley, Luke Omodt and Dave Bowman for having “extensive liberal influences.” He targeted Omodt, specifically, for his “lifetime of reliance on government paychecks” — something that Omodt, who recently retired from a 23-year career with the Idaho Army National Guard, did not take lightly. In his own opening statement, Omodt said that he was “insulted” on behalf of himself as well as other servicemen and women who graduated from Sandpoint High School and went on to join the armed forces. 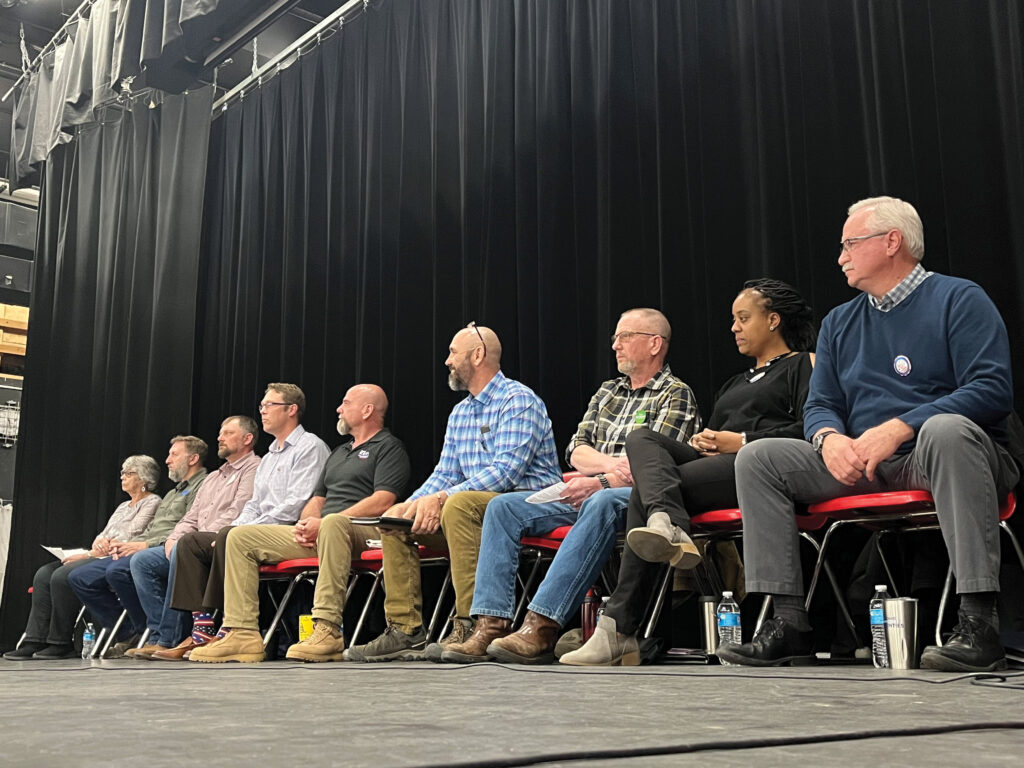 Candidates for Bonner County races attend the forum May 2. Photo by Lyndsie Kiebert-Carey.

“Some of us actually live our words, and some people run their mouths,” Omodt said, adding later: “Tonight you will get to hear a very different idea of what government means. To some of us, it means service before self.”

Bowman said that his inspiration for seeking the commissioner seat stemmed from getting involved in local land use issues. Bowman currently serves as chair of the citizens’ group Keep Bonner County Rural, but said he will give up that position if elected.

“I met with people all over the county and I heard a pretty consistent theme: They felt disrespected by our current commissioners, and they felt as though they were catering primarily to big developers and corporations rather than listening to the people,” Bowman said.

Riley said his extensive business background as the longtime employee and plant superintendent of the Idaho Forest Group mill in Laclede qualified him to manage the workforce and budget of Bonner County.

“Basically, you are running a business when you are a commissioner. It’s a board of three — it’s not one person. None of us up here who get elected, individually, can change the office,” Riley said. “We have to work together.”

Korn said that, if elected, he planned to make the board’s actions more accessible to county residents.

“I don’t know about you guys, but a lot of these policies and ordinances that are written these days, I can’t even understand,” he said to the forum audience. “I’m going to be up front with you. How is the public supposed to understand what the county is doing when they can’t even read what’s in that document? I would like to bring that back to the people.”

Harter characterized himself as a candidate of action.

The District 2 race featured two candidates: two-term incumbent Jeff Connolly and challenger Asia Williams, who did their own share of sparring over the issues during the forum. A third candidate, Randi Flaherty, could not attend.

Connolly said that “people forget about what this is about” — “this” being the opportunity to vie for a commissioner seat. Rather than focusing on “political ideology,” he added, it’s a chance to ask, “what can you do for your community?”

Williams made note of her consistent participation at commissioner meetings, during which she has been a vocal opponent of recognizing Juneteenth as a holiday and a staunch advocate for refusing American Rescue Plan Act funds.

“I have been not just a person who has sat in the background,” she said. “I’ve been writing resolutions. I’ve been arguing for property rights. I’ve been submitting information to our county commissioners. At this stage, with my level of involvement, the best option for Asia Williams is to be District 2 commissioner because it will remove a lot of the roadblocks.”

Harter, Bowman and Korn also came out against using the money — which some argue would obligate Bonner County to comply with federal mandates regarding COVID-19 mitigations — with Korn stating that ARPA was being used “to push transgenders and the other 46 genders,” and “to employ those people.”

ARPA includes funding for programs and benefits intended specifically to assist in the economic recovery of LGBTQ communities, communities of color, the disabled and low-income households that were hit hard to a statistically disproportionate degree by the COVID-19 pandemic.

Connolly said that he was not opposed to spending the funds for “one-off” purchases and programs supported under ARPA, but also that the county was “being cautious.” Riley said he supported the cautious approach, while Omodt also advocated for “prudent” usage.

The county’s legal counsel issued an opinion earlier this year stating that Bonner County could likely use the funds without taking on obligations related to vaccinations or masking.

One of the most frequently requested questions of the night pertained to whether candidates had ever filed for bankruptcy or been arrested. While most candidates replied “no” on both counts, both Omodt and Connolly noted DUI charges from 20 years ago. Harter said he filed for medical bankruptcy in 2001, and noted that he’d been arrested. On his website, under a tab titled “Standing Up,” Harter acknowledges being arrested three times — once for battery, once for failing to provide identification and once for disturbing the peace. Of the three charges, Harter said he was only convicted of the last.

The assessor’s race, which has only Republican candidates, featured incumbent Donna Gow and challenger Grant Dorman. The third candidate, Jessi Webster, was not present.

While the race drew considerably less attention than the commissioner candidate field, Gow and Dorman used the forum as an opportunity to share their overall philosophies when it came to the assessor’s position.

“Property taxes are a challenge of property ownership, and I, for one, would want someone who respected that principle to be my assessor,” he said.

Gow highlighted some of the changes she’s made to the office since being elected in 2018, and emphasized her experience in the office.

“Experience counts,” she said. “Both of my opponents have said that when they start out they will start interviewing employees, learning about the work flow. I already know that. There is no on-the-job training.”

When asked how they planned to improve DMV operations in the county, both Gow and Dorman acknowledged that the state would be cutting funds to those offices in the coming year, requiring creativity on the part of the assessor to keep DMV services available to the public.

Listen to a recording of the entire Bonner County candidates’ forum at krfy.org.