The plan, drafted by a commissioner-appointed committee, is nearly 100 pages long and outlines Bonner County’s goals for its natural resources. 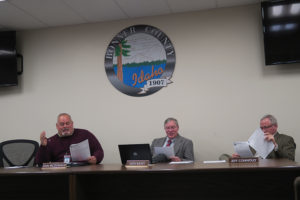 Commissioner Glen Bailey said federal agencies are required to work with counties on natural resource issues as mandated by the federal coordination clause. However, those agencies are only required to take the county’s desires into consideration if their goals are published in an officially adopted plan.

“As with any such plan it must be understood that it was written for today, for our current county commissioners to use as they best can,” Bailey said. “This plan is not law. It can be changed.”

The final public hearing for the plan saw a packed house on Jan. 17, when more than 20 people made statements opposing the plan. Commissioners said Tuesday that the document has seen several revisions since that meeting.

Commissioner Jeff Connolly questioned whether the plan would have any power over state agencies, seeing as they don’t adhere to the coordination clause.

“I’m not sure that this pertains to state lands at all,” he said. “I’m really quite curious whether this has any real standing with the state, but I’m willing to move forward with it.”

Bailey said the Natural Resource Plan will be reviewed in its entirety at least every other year.

Commissioner Dan McDonald thanked the Natural Resource Committee for spending over four years on the document.

County Assessor Jerry Clemons said that if any future board of commissioners looks to amend the plan, he hopes they take plenty of time.

“I hope they study it as you have,” he said to the current board. “I’m hoping a future board won’t make any knee-jerk changes.”