After numerous weather-related delays, first from the fall to the spring and then from early May to late May, Sandpoint residents will get their first taste of two-way traffic when Idaho Transportation Department oversees the switch on Fifth Avenue between 7 and 8 a.m. The city is mobilizing to help with the transition, and City Administrator Jennifer Stapleton cautions residents to remember to look both ways when approaching a Fifth Avenue intersection. 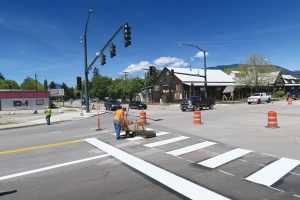 City workers paint new crosswalk stripes and traffic lanes at the intersection between Fifth Ave. and Cedar St. on Monday. Traffic will revert to two-way on Fifth Ave. on Thursday morning. Photo by Ben Olson.

“This reversion to two-way has been managed by ITD, and the city has been in contact with ITD for dates and times for reversion so officers can be on site … to monitor how this is going and help ensure people know that traffic patterns have changed,” Stapleton said.

Following the Fifth Avenue switch-over, the ITD contractors will focus on a controlled roll-out of two-way transitions throughout the rest of downtown. The next on the agenda is Pine Street, which will be converted to two-way traffic running east and west. Crews will then divert all through and truck traffic from northbound First Avenue to westbound Pine Street to northbound Fifth Avenue while striping, signage and signal work takes place from First and Pine to Fifth and Cedar. Following that work, Church Street will be converted to two-way traffic east and west between First and Fifth avenues, with through traffic diverted one to two blocks at a time. Finally, the northeast corner, including the intersection of Fifth and Pine, will take place, returning Pine to one-way traffic between Fifth and Fourth.

It’s the first step in a long-awaited change for both residents, the city and Idaho Transportation Department. Due to the combined influences of weather and a desire to not rush the transition, the original goal of switching to two-way was delayed from last fall to this spring. When work was set to return this spring, the weather refused to cooperate.

“We were looking forward to a nice spring, and of course, when spring rolled around, it wasn’t looking so well,” said project manager Jeff Spohn.

While the goal was to have the changes complete before Lost in the ‘50s, the constant rain made that untenable. The street re-striping, which requires consistently dry conditions, was particularly reliant on stable weather. According to Spohn, the contract crews focused on tasks that could be handled regardless of rain until May 22, when sunny weather became more frequent.

“That’s when we told the contractors, we’ve got to get this thing done,” Spohn said.

For Spohn, the experience of working on the two-way traffic switch-over feels like coming full circle. He was the lead inspector on the Fifth Avenue project in 2001 that widened the street and introduced other changes. He’s excited that the end to this latest phase of street work is drawing near.

“This will be a relief to get it wrapped up,” he said.

Once the transition to two-way traffic is complete, the city of Sandpoint will regain control over its downtown streets. It’s a necessary step before the city can begin its downtown revitalization plans, which include improved aesthetics, amenities and infrastructure throughout the downtown core. The first phase of this project, focusing on sewer main replacement, amenities and infrastructure, was recently put on hold by the city due to contract bids coming in well above expectations.

The transition to two-way traffic is the final step needed to redirect highway traffic entirely out of downtown Sandpoint, a process begun with the completion of the Sand Creek Byway in 2012. Following that project, ITD officials proposed an extension for U.S. 2 called “the Curve,” which the Sandpoint City Council rejected due to concerns over its size and safety for bike and foot traffic.

The two-way traffic transition for downtown Sandpoint proved an acceptable compromise for both the city and ITD. It is a $2.1 million project with Earthworks Northwest serving as the contractor.