Celebrating a century of suffrage

History books are undoubtedly a vital tool in understanding the past. It only makes sense to keep records of years and days on which monumental events happened. One such event, recounted in history books for 100 years now, is the ratification of the 19th Amendment on Aug. 18, 1920 — when women were granted the right to vote. 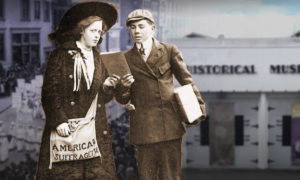 But the fight for women’s suffrage began long before August 1920. Nearly a century passed before activists reached that final goal — activists who remain both named and unnamed in the history books. While those extensive texts may list dates and important happenings from the past, what they often lack is the human element so vital to understanding how and why people changed the course of history.

The Seattle-based educational theater group travels the country sharing historically inspired stories that utilize live acting, video, audio, photos and discussion to bring what can be learned from history books to life.

Sandpoint will have the chance to experience the women’s suffrage movement when Living Voices performs Hear My Voice at the Heartwood Center on Wednesday, March 4 as part of the Pend Oreille Arts Council’s ongoing Performing Arts Series.

Hear My Voice tells the story of Jessie, a young woman living in Washington, D.C. in the early 1900s. She aims to one day be as important to her father — a political columnist — as her brother seems to be. When Jessie’s Aunt Charlotte pays the family a visit, Jessie finds herself swept into the suffragist movement as her aunt teaches her about the women who started the fight, and her contemporaries who have taken up the cause. Jessie becomes deeply involved in the movement as her brother heads overseas to fight in World War I. Each family member must take a stance as both the war and suffragist movement ramp up.

The narrative is a microcosm of the turmoil of the early 20th century in the United States, and — through the Living Voices format — serves as a moving way to pay tribute to the centennial of women securing the right to vote.

Hear My Voice is the fourth installment of POAC’s 2019-2020 Performing Arts Series. The fifth and final installment is slated for Saturday, April 18, as Missoula Children’s Theater brings Cinderella to Sandpoint. Local children will be given roles in the performance, which will see show times at 1 p.m. and 4 p.m. on the Panida stage.