Somewhere inside a North Idaho airplane hangar, amid small planes taxiing across the runway and flickering lights, great music is being played.

Calling themselves The Wow Wows, the newly formed four-piece band features a sound that lives in a comfortable place somewhere between surf rock, indie punk and alt-folk. And they practice in an airplane hangar, which is pretty cool. 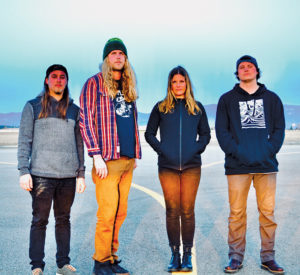 With Jones on lead guitar and vocals, Casey Calhoun on bass and vocals, Sage Guerber on drums and Dyllan Darrington playing rhythm guitar and contributing vocals, The Wow Wows have carved a nice soundscape with their tunes, mostly written by Jones with Calhoun contributing on a few. Calhoun and Jones live in Sandpoint, while Darrington lives in Rathdrum and Guerber resides in CDA where the band practices.

Jones and Darrington grew up together in Rathdrum, riding the same school bus.

“We both starting playing guitar when we were 12 or 13,” said Jones. “I played in various punk bands, Dyllan played in a punk band called ‘Ongoing Concept’ that actually went to Warp Tour. My band was called ‘Daddy Banana Bread,’ but they dissolved. It was old school punk rock.”

Jones said he also played in a band with Guerber’s older brother in high school.

“Sage always sat around on the drums watching us play, taking notes,” said Jones. “When he officially started playing drums for real about eight months ago, he picked it up really quick.”

Jones said the band is going to be looking for a new drummer soon, as Guerber will be leaving the band to pursue his dream fly fishing in south Idaho this summer.

While Calhoun and Jones both live in Sandpoint, Darrington and Guerber are located in Coeur d’Alene, so the band trucks down to the Coeur d’Alene Airport to practice in a hangar they’ve been authorized to use.

“It’s pretty cool, you can just open up the doors and look out and see the whole runway and everything,” said Jones. “If they activate the runway lights at night, it gives the parking lot a blue aura about it. Because of the wiring in the hangars and so much power being drawn, the lights tend to flicker, but only when the music gets really good, I’ve noticed. Plus, playing next to an experimental two-seater aircraft, it gives it a natural reverb sound.”

“She brought me over and played me some Townes Van Zandt songs on the ukulele,” he said. “She’s a super good singer, been singing since she was a little girl in choir. Plus, she likes all my favorite songs, especially obscure alt-rock stuff.”

Jones, who said he’s been writing songs since he was 14, said that despite his fast, aggressive upbringing into the world of music, The Wow Wows’ sound is somewhat toned down thanks to Calhoun.

“Casey balances us out,” he said. “She doesn’t want anything sounding too metal.”

As a result, the band has established a totally listenable, catchy sound with hard edges wrapped in a gossamer, melodic jacket. The drums and bass set a smooth foundation, forcing you to tap your foot. The sporadic lead guitar solos by Jones allow for a great dynamic range and Darrington holds things together with the rhythm guitar.

“We’re always exploring our sound,” said Jones. “I never really thought about it, though. We take from many different genres of music. I don’t want to sound like anybody else, but I want to be where rock and roll should be heading. It doesn’t sound completely new, but you can’t put a finger on it as an old style.”

The Wow Wows will be playing the 219 Lounge on Friday, March 16 starting at 9 p.m. with Montana alt-punk band High Treason Ammunition sharing the bill. It’s a free show for 21 and up, so come out and support local music.