CAL gives over $100k in grants to local nonprofits

It was a good day to be a nonprofit Wednesday. As it does every year about this time, the Community Assistance League, or CAL as it is called, awarded $105,000 in grants to 44 local nonprofit organizations Wednesday at the Sandpoint Center. 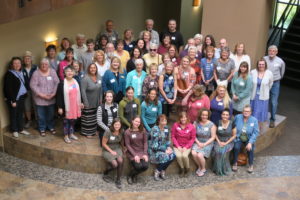 Grants chair Bobbie Franklin said all of the awarded grant money is generated from sales at CAL’s Bizarre Bazaar thrift shop in Sandpoint.

“To be awarded a CAL grant, they have to be a nonprofit, the project should be something that affects a large number of the community, and it must be a project that will be completed within the year,” Franklin said. “This year, a lot of our grants went to child- related projects.”

Franklin said about two-thirds of the grants were awarded to in-school and out-of-school programs for kids, as well as some to child protective services.

“This will be our fourth year receiving a CAL grant,” Larson said. “It sustains us. This year we were donated an airplane – a RV-6 model plane which doesn’t have an engine. This project would not happen without a grant like this.”

Two of Larson’s students were on hand to share why they joined the aviation program.

“Initially, my parents sent me,” said Sophie Dignan, 15. “After awhile I really got into it and got to know about aviation in general and I stayed because of the opportunities. I really enjoy being a part of it.”

Fourteen-year-old Kyle Donker said he joined the aviation program because he wants to “join the Air Force and get flight hours to learn how to fly.”

Another grant recipient was Joan Avery with the Sandpoint Youth Center. Avery said she will use the grant money to help fund a popular new program that has seen high school participation skyrocket.

“Since we’ve moved to the bowling alley, we now offer a place for kids to bowl and play pool for free,” Avery said. “We’ve seen an incredible increase of involvement since we’ve added bowling. We used to get 5-10 high schoolers in before when now we’re seeing 70 kids show up to bowl.”

CAL is celebrating their 40th anniversary this year. They also annual award scholarships to local students, which will take place soon.

“We’ve given over $1.4 million away to enrich life in this county,” Franklin said. “That’s what it’s all about.”