Sandpoint City councilors voted 4-2 to amend the land swap agreement with Bridge Street, LLC at their regular July 20 meeting, making the exchange final as of Monday, Aug. 1 and giving the company until Aug. 30, 2023 to complete foundation improvements adjacent to Bridge Street.

The item had originally been on the council’s consent agenda — reflecting the seemingly minor nature of the change, which came about because of a delay caused by survey work needed to complete the plat. 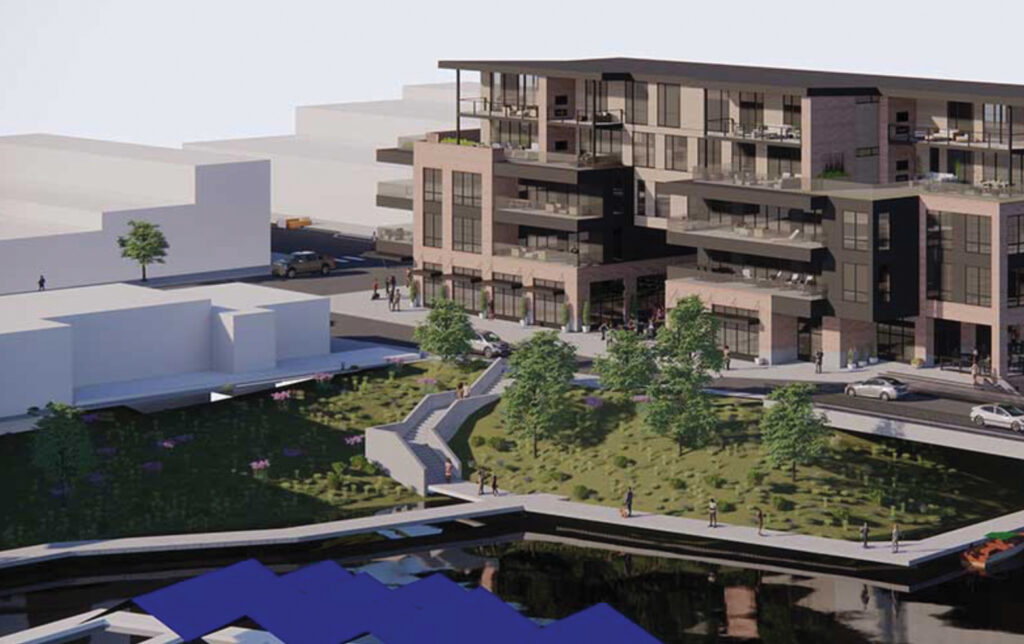 “This is an agreement for timelines,” said City Attorney Andy Doman. “We’re not asking for a new agreement, we’re asking for a modification.”

That may have been so, and the amendment may have sailed through without any comment, but for a website loaded with slick renderings depicting a 65-foot-tall mixed-use development billed as “small town luxury living” that ripped through the local social mediascape beginning July 15. Outrage at the scale of the project only grew, as observers parsed through the onebridgestreet.com site seeing 13 high-end condos towering over the creek.

“You can’t just let this go down. You really can’t,” testified longtime resident Rebecca Holland. “It’s not in the historic character of our town … it’s a monstrosity, as I heard someone put it today.”

Residents recoiled based on those images, generating so much reaction that the land swap amendment was moved from the beginning of the meeting so as to accommodate more public comment.

Sandpoint Infrastructure and Development Director Amanda Wilson said early in her opening presentation that the city has not received any permit applications from the developer, but had attended multiple pre-application meetings. Also, what appears to be construction occurring on the site is actually work requested by city staff to support the road and sidewalk.

As for the renderings that circulated throughout the community in recent days, Wilson called them “promotional materials … that are released to attract pre-sales.”

“They are cartoon in nature,” she said. “They are not construction drawings.”

That said, much is still in flux despite the new land swap finalization date of Aug. 1, including closing on the exchange, receipt of the money and security and recording the plat. Only after that can a building permit be submitted. After that follows a staff review estimated to last anywhere from two to four months. Once code compliance has been assured, only then could construction begin with a date of completion “to be determined,” Wilson said, adding there are “too many variables” to say exactly when anything will be built on the site — or even what it will eventually look like.

Of course, that’s despite One Bridge Street, LLC’s website’s claim that the project will be delivered by September 2023. The company — with its registered jurisdiction in Delaware; a street address in Carson City, Nev.; and an office in Newport Beach, Calif. — did not respond to a request for comment.

In September 2020, Bridge Street, LLC developer Cliff Davis told the council via Zoom that his company “is currently owner of the biggest eyesore in Sandpoint, and we’d like to take care of that as soon as possible.”

Indeed, since a fire gutted five businesses at First Avenue and Bridge Street in April 2019, the corner has been a deep scar on downtown. So it was with great anticipation that residents awaited what might come next to the core property — formerly home to busy retailers, bars and restaurants.

With the land swap amendment approved, the ball could get rolling on filling it as soon as Aug. 2, depending on when the developer submits its permit application. Yet, in the biggest sticking point for City Councilor Jason Welker, the process through which the project will move won’t include a public hearing process.

Rather, Sandpoint City Administrator Jennifer Stapleton told the Reader in an email ahead of the meeting that because the development would occur inside a commercial zone it would only trigger a public process if it included features such as a drive-through or a footprint larger than 15,000 square feet — all of which would require a conditional use permit. That rule has been on the books since 2010, with some “minor edits adopted in 2014,” she said.

“Had this development been submitted in 2010, it would still have gone through a staff review process,” Stapleton added.

How that works: the applicant applies for a building permit, then staff reviews it for code compliance, including zoning, building, fire, and engineering for stormwater and utilities. Changes and corrections are typically required, triggering resubmittal and another round of review. That process continues until the project complies with code. If a development is larger than eight units, adjacent property owners are notified of the staff decision, along with notification of a comment and appeal period — the latter offering the only other opportunity for the public to weigh in.

She underscored that the city has a “significant amount of design criteria” in the code, “which is not necessarily reflected in this rendering, which is typical.”

“The renderings are used primarily for promotional and pre-sale purposes,” Stapleton added.

That didn’t sit right with Welker, who despite having served on the Planning and Zoning Commission said he was surprised that such a large-scale potential development wouldn’t be subjected to public review.

“When I first saw the cartoon drawings of this development last week and saw that it included 13 dwelling units … I just naively assumed there would be a CUP process because this is more than eight units,” he said. “I only learned recently that residential developments of any size are allowed within the commercial zone without a CUP.”

What’s more, despite the number and size of the units — the smallest on the One Bridge Street website described as more than 1,100 square feet and the largest at just more than 3,000 square feet — the total footprint would be less than 15,000 square feet, below the threshold for a CUP.

“I was quite surprised this afternoon to learn that there will be no further opportunity for public comment on this project after tonight,” Welker said.

Every citizen who did comment on July 20 was adamant in their objection to what the One Bridge Street website portrayed.

Lauren Sanders, of Sandpoint, wondered why the decision on the land swap amendment couldn’t be delayed to look at code changes to protect against overdevelopment, adding, “I would just hope y’all vote against this. We’re kind of setting the precedent for the future of our town.”

Sandpoint citizen Will Harrison worried about affordability and suggested that a CUP process might help ensure some income limits for future dwellings. Holland agreed, saying that, “hand-wringing about affordable housing is just a facade if this is allowed. … You represent the people who live in this town — not developers from Nevada.”

Husband and wife Jamie and Mark Terry — the former a yoga instructor and the latter the general manager of the 219 Lounge — testified that such a development would harm, rather than benefit the community.

“In five years we’ve had to move six times … because of greed,” Jamie testified. “Because we keep getting kicked out of rentals, because rental prices keep skyrocketing.”

“I don’t begrudge anyone their abundance at all, but I hope there’s a really strong sense of ‘why’ this kind of development should go forward,” she added.

Mark said later that, “Having 13 new condos just doesn’t outweigh keeping people in the community year round. … When you bring in another building with $1 million condos, it’s just going to raise everybody’s rent.”

“People are leaving left and right,” he added.

After some discussion about further amending the agreement for a finalization date of Sept. 1 or outright tabling the decision, Councilor Justin Dick said he sees the issue “slightly different than what some of the citizens have brought.”

Noting that he probably traverses Bridge Street more than any other resident in the city, being owner of Trinity at City Beach, he said that while he was “sickened” by the One Bridge Street renderings when he first saw them and thought they were “a little bit reckless,” he remembered previous uproar over the bypass, Seasons at Sandpoint and the Sandpoint Center — all considered “monstrosities” in their early days, but “they have added vitality to our community,” he said.

“There will be a positive outcome when it’s finally done,” he said of whatever eventually gets built on the corner of Bridge Street and First Avenue.