Though it is a signature feature of the Sandpoint area, the span of U.S. 95 commonly referred to as the Long Bridge hasn’t received a lot of attention from state transportation officials in recent years.

That changed in 2021, as state-level infrastructure planners have focused their efforts on a number of projects affecting the iconic bridge — most recently, the opening last week of a revamped pedestrian and cyclist path beneath the bridge, providing a safe east-west crossing between Lakewood Avenue and Lakeshore Drive. 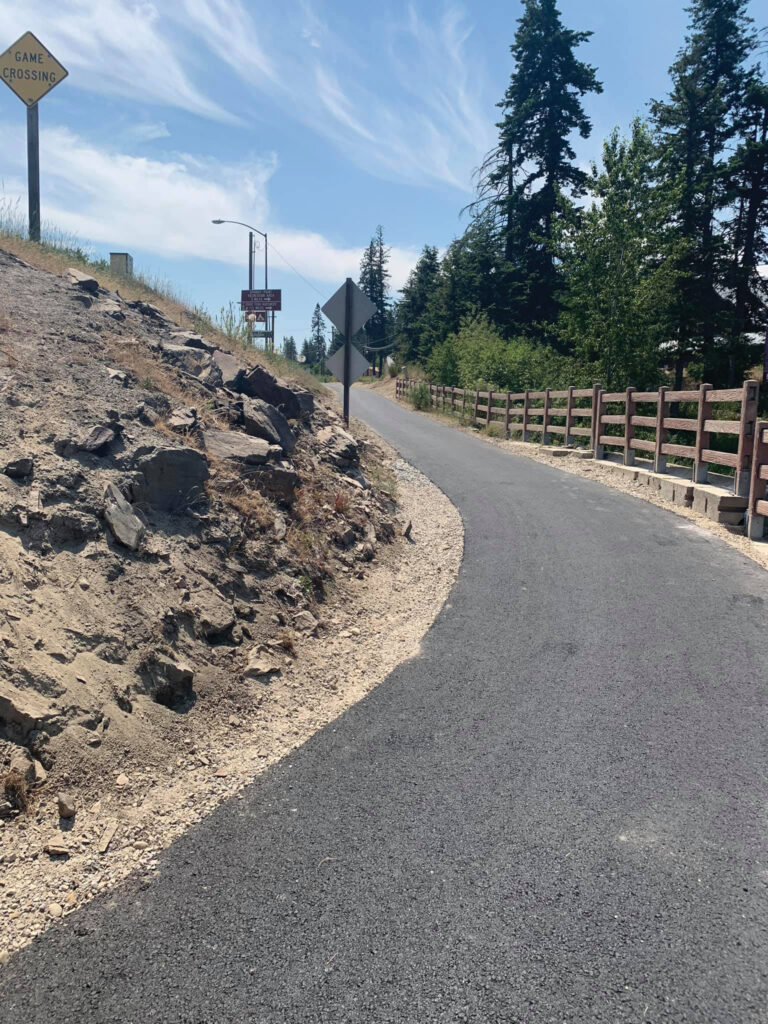 A view of the bike path under the Long Bridge. Photo by Susan Allen/Facebook.

Meanwhile, the pedestrian and vehicle bridges are also the subject of a long-range plan that includes new acceleration and turning lanes to help bring both spans in line with a 100-year service life.

For the vehicle bridge, that means making the structure fit for service until 2081 and the pedestrian bridge until 2056.

Idaho Transportation Department officials said deck work on the vehicle bridge is scheduled for 2029, though “we haven’t officially programmed our money out that fair,” according to ITD spokesperson Megan Jahns.

In the meantime, work will focus on easing traffic flow at the south end of the bridge, with a two-phase project beginning this summer.

Phase 1 includes acceleration lanes to help drivers get up to appropriate merging speed headed north or south, as well as transitioning the existing center turn lane on U.S. 95 into a dedicated turn lane for motorists northbound and attempting to make a left turn onto Lakeshore — a traditionally difficult maneuver during times of peak traffic.

Phase 2, slated for 2022, will bring more changes, with a median U-turn installed that would allow drivers to make a southbound right turn onto U.S. 95 from Lakeshore, traveling to Bottle Bay Road, where they could make a turn to rejoin northbound traffic and onto the bridge, avoiding congestion — identical to the alignment in place on U.S. 95 in Ponderay.

Finally, a signal will be put in place at Sagle Road.

Jahns emphasized that, despite persistent local rumors, a roundabout is not planned at U.S. 95 and Lakeshore and future plans for the road work will include public outreach, including information meetings this fall.

Jahns told the Reader that ITD has received funding to investigate the stretch of U.S. 95 that includes the Long Bridge, intended to assess its future needs — all the more important amid an ongoing influx of new residents and the bottleneck nature of the bridge. While much work has been done on U.S. 95 in sections from Cocolalla south to Coeur d’Alene, those four-lane roadways inevitably funnel down to the two-lane Long Bridge, creating frequent traffic snarls during the busy summer months.

“That study is going to help us figure out what’s the best scenario,” Jahns said, adding that it will be a public process with ample opportunity for feedback.

Public comment is open on the draft Idaho Transportation Investment Program until July 31. The seven-year plan is available for review at itd.idaho.gov/funding. For more information and updates on the U.S. 95-Lakeshore project visit itdprojects.org/projects/us95lakeshoredrive.