The vision of the Bonner Gospel Mission originated with Corky Kalben in 1982.

“In those years I was doing jail ministry because I had been in and out of jail,” said founder Kalben. He speaks of a young man who “gave his heart to the Lord” in jail, but Kalben was sure that after he got out he would be picked up by his buddies and they would “smoke a joint and have a beer down before they got out of the parking lot, so it was laid on my heart to do some kind of work like this.” 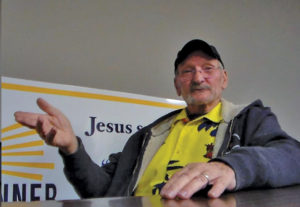 Five men were staying in the mission, located in Ponderay, during this interview in sub-freezing early 2019. The mission is a series of three buildings: One is administrative, one holds the communal kitchen’s large table and circle of chairs, and the third is full of bunks and private quarters with a communal bathroom and laundry area.

“Around 1987, we turned in the paperwork (for the mission). The Lord opened up all of the doors. I am kind of an uneducated guy, but the Lord still used me … It says in the scriptures that God even used a donkey. I am kind of the donkey of this operation,” said Kalben, a Christian comedian as much as a visionary.

At first, the mission was called “New Hope Ministries,” and it was far out of town on a ranch. Since 1990, the BGM has been at its current location (neighboring the LPOSD administrative building).

According to Kalben, the mission works “because of Gayle. She is the brains of everything.” His wife laughed at that and reminded him he is on camera. “We have been married since 1981, and she has been with me since the beginning of this work,” said Kalben. “Gayle has put up with a lot.”

Steve Shubarth volunteered on the work crew when the Kalbens’ “blue-tarp roof” was replaced. “I am getting to be an old man,” said Kalben, explaining that Shubarth now carries the torch as the BGM director since April 2018, but Gayle is still the active secretary.

“How can I help you? What is your problem?” Kalben says he approaches those in need. For Kalben the answer is simple: “Your problem is sin, and your answer is Jesus. Gospel means good news. I have good news — it doesn’t matter who you are or where you are at or what you have done, Jesus Christ died on the cross for everybody’s sin.”

The Sandpoint Christian Center, which was backing Kalben’s vision, said that he needed a board. “The first thing I thought, from being a surfer back in the ‘50s, is board … surfing! So I had to buy a book to find out what a board of directors was,” said Kalben.

Kalben grew up in San Diego and moved to Sandpoint in 1975.”My whole plan was to grow marijuana, but it didn’t work too good with the deer and the cold weather,” Kalben said with a laugh. “So God got a hold of my heart. I got saved in 1979 on a Greyhound bus.”

Shortly after the mission moved to its new location, Kalben broke down crying alone in his office because he couldn’t pay the bills. Kalben jokes that people might call him “schitzo or something.” But he said seriously, “I heard God speak to me, and he says, ‘Corky, it’s not your mission.’… God has always met our needs.”

Who does the Bonner Gospel Mission serve? “I always figure that there are those traveling through, the homeboys and those getting out of jail. All three of those ministries are at work here,” said Kalben. Sex offenders and other criminals are received, which is why BGM serves men only.

The facility is orderly and clean, with a faint smell of Simple Green. The three buildings are connected by covered breezeways, and when I was there in the dead of winter, it was cozy and warm (though their pipes did freeze at one point). The old metal military bunks are adorned in brightly colored patchwork quilts, and the private rooms are simple and inviting. Some updates like new carpet are needed, but despite its old patchwork of donated materials, the mission is still actively on a mission.

“I feel like it has been a life-changing thing for me,” says a 31-year-old with a radiant smile. “I used to have a lot of drug and alcohol abuse.” He had been staying at the mission for over a month when I met him. “I feel security here for now,” he said. “Here at the mission, if they are actually helping you, they want you to be here. They are helping us with our roots so we can reach the next step.”

A 61-year-old man says the mission helped him a lot, but he was apprehensive when I asked him what the next step was. He had been living at the mission for over two months, and his chores included vacuuming carpets, laundry and collecting phones.

Both of these men agreed that having their phones taken away at night was alright. Shubarth said that in addition to the discipline of not accessing a personal computer at night, it provides the men with opportunity to “fellowship.”

The Bonner Gospel Mission is funded from local churches and private donations from individuals. If you want to learn more, check out their website, BonnerGospelMission.org, and subscribe to their newsletter.