BeerFest: Yet another excuse to enjoy beer 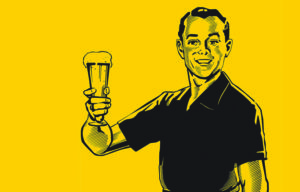 Few things beat a cold beer on a hot summer day, and lucky for those sticking around Sandpoint for what is predicted to be a hot weekend, there’s Sandpoint Beerfest on the lake to ease the 90-degree woes.

The Greater Sandpoint Chamber of Commerce, MickDuff’s Brewing Co. and Laughing Dog Brewery have teamed up this year to bring Sandpoint its fourth Beerfest, and due to popular demand, this year’s event has the capacity to comfortably accommodate over 1,000 people. With nearly 40 beers and ciders on tap — and showcasing a dozen Idaho breweries — this Beerfest goes big in a way Sandpoint hasn’t previously seen.

Chamber President Kate McAlister said that with big events like Beerfest, non-profits like the chamber often decide during the event’s third year whether it is worth continuing to put effort into said event. She said last year was that point for Beerfest, and the chamber’s decision to continue the event is a testament to its unique nature and popularity.

Event Director Mack Deibel with MickDuff’s said what makes Sandpoint’s Beerfest unique this year is the fact that it’s a “beer bash on the beach” at Trinity at City Beach, whereas most other beer festivals are held in convention centers or ball parks.

“Rarely are you in a spot this awesome,” he said. “Moving (Beerfest) to the water is taking it to the next level.”

There will be live music from Tennis and the Hophedz featuring Megan Turner, sponsored by Laughing Dog Brewery. Michelle Sivertson from Laughing Dog helped organize the music portion of the event, and as incoming chair of the Greater Sandpoint Chamber of Commerce she said she looks forward to continuing to be involved in Beerfest. This is Laughing Dog’s first year helping put on the event.

“I am amazingly proud of what (Deibel) has done, and Laughing Dog is so proud to be a part of it,” she said, adding Laughing Dog considers MickDuff’s a sister brewery. “Such great people make it happen.”