It wasn’t all tragic news for the Bonners Ferry Fire Department last week. The department scored about $50,000 worth of turnout gear after winning a dance video contest.

What started as a half-joking side project turned into gold after Viking Turnout Gear officials selected the volunteer department as the winner of the 2016 Shake Off Challenge. The challenge asked departments to submit dance videos set to the popular Taylor Swift song “Shake It Off.”

“It was kind of a spur-of-the-moment thing, but it turned out to be a big boost to department budget,” said Bonners Ferry Fire Chief Pat Warkentin. 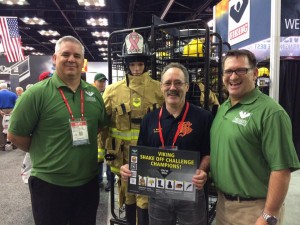 Ken Baker, a captain with the Bonners Ferry Fire Dept. accepts an award for over $50k worth of gear for winning the “Viking Shake Off Challenge.” Photo courtesy of Viking Turnout Gear Facebook page.

According to Warkentin, the department learned about the video after its gear supplier from Spokane mentioned it to them on April 1. After determining that it was not, in fact, an elaborate April Fool’s Day prank, they decided to give it a shot. There was just one problem: The deadline for submission was the next day.

“That didn’t leave a lot of time,” said Warkentin.

Fortunately, they had a secret weapon. After wrangling together about half the volunteers, firefighter Andre Rosengrant’s sister, Ilona Rosengrant, offered to shoot and choreograph the video. Before long, Bonners Ferry firefighters were pulling off dance moves—including Warkentin, who donned a kilt for the occasion. After they completed the video shoot, Andre Rosengrant took the footage and edited it into a video just under two minutes. Department members completed the submission paperwork and uploaded the video to YouTube with just a couple hours to spare.

“The two of them together, Ilona and Andre, without them this thing wouldn’t have gone anywhere,” said Warkentin.

The upshot is enough turnout gear to outfit around 10 firefighters, and at a $50,000 value, it’s a big haul for a volunteer department with an annual budget of just over $200,000. The gear is a state-of-the-art design, Warkentin said, offering superior protection against flames and harmful particles while being relatively light-weight.

“It’s really a superior product is what it amounts to,” said Warkentin. “A lot of departments have gone with this gear.”