The gay man behind the 1963 march on Washington

As a politically active black man in 1950s and 1960s, Bayard Rustin had, in addition to his race, three strikes against him: he was a pacifist; he was a Communist; and he was openly homosexual.

In 1936 Rustin became a member of the Young Communist League, but he broke with the party when it decided to deemphasize civil rights in favor of uncritical support of the Soviet Union. 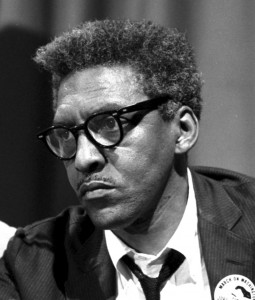 Bayard Rustin in 1963. Courtesy of the Creative Commons.

During World War II he began his long association with the Fellowship of Reconciliation (FOR), a pacifist organization founded in 1914 by an English Quaker and a German Lutheran.  His grandmother, who raised him, was a Quaker, but she and her grandson attended a local African Methodist Episcopal Church.

From 1944 to 1946 Rustin served 28 months in a federal penitentiary for refusing to report for military service.  While in prison he worked diligently to end segregation in the prison dining hall.

Rustin was an all-inclusive civil rights worker.  He traveled to California to protect the property of Japanese Americans who had been interned during the war.  While in prison he established the Free India Committee, and he later convinced Martin Luther King, Jr. to follow Gandhi’s principle of active nonviolence.

In 1947 Rustin led an attempt to integrate the interstate bus system.  In Chapel Hill, North Carolina, he and his associates were set upon by a mob, but it was he, rather than his attackers, who served 22 days of hard labor for “inciting a riot.”

In 1953 he was arrested for having sex with two other men.  Thanks to a 2006 Supreme Court decision decriminalizing sodomy, no one can be arrested for consensual sex of any sort in today’s America.  The Texas law that was truck down was particularly discriminatory in that it did not outlaw “unnatural” sex acts between heterosexuals.

After his arrest Rustin lost his job at the Fellowship of Reconciliation.  Even though under this dark cloud, King still took him on as an adviser in 1956.  As a seasoned civil rights worker, his experience was crucial to the success of the Montgomery bus boycott.

Rustin biographer John D’Emilio writes that Rustin “was the perfect mentor for King at this stage in the young minister’s career, and Rustin left a profound mark on the evolution of King’s role as a national leader.”

Rustin convinced King that he needed a permanent organization to stabilize his movement, so together they founded the Southern Christian Leadership Conference (SCLC). When black Congressman Adam Clayton Powell threatened to expose him as a gay man, Rustin was forced to resign his SCLC leadership position.

Working behind the scenes, Rustin was the main organizer for the 1963 March of Washington, the venue for King’s “I have a Dream” speech.  The other organizers made sure that Rustin was not given any public credit for this historic event.

Supplied with FBI wire tap information Senator Strom Thurmond gave a speech in the Senate in which he called Rustin a “Communist, draft-dodger, and homosexual.”  For the very first time someone came to Rustin’s defense.  Labor leader A. Philip Randolph attested to Rustin’s integrity, and the fact that Thurmond’s attack fizzled produced a glimmer of hope that equal rights for gays and lesbians might be possible.

Rustin advised King not to speak out against the Vietnam war, but King did it anyway.  Friends were puzzled why this fervent pacifist did not join the anti-war movement.  His response was that he was against a precipitous withdrawal of troops because the Communists would set up a brutal dictatorship.

Rustin also reminded his supporters where his duty ultimately lay: “To those who have urged me to switch from civil rights to peace, let me say that this war will be over, and my job is to help see to it that when the black soldiers come home, they will have something decent to come home to.”  Rustin preferred to keep his “eyes on the prize.”

Rustin’s last civil rights battle was for his gay brother and sisters: “The barometer of where one is on human rights questions is no longer the black community, it’s the gay community, the community which is most easily mistreated.”

Rustin would have been amazed, just as many of us are even now, that America’s gays and lesbians can now marry.  The blow-back from that decision indicates that there is much more work to do (specifically, discrimination in the workplace and housing), but we will be forever indebted to Bayard Rustin for his early and courageous leadership.

Nick Gier of Moscow taught philosophy and religion at the University of Idaho for 31 years.