Still crazy after all these years

There’s no doubt about it: Sandpoint loves the great outdoors, whether that means exploring it or learning about it.

And there’s no better place to see the world from the comfort of a theater seat than the Banff Mountain Film Festival, which hits the Panida silver screen next weekend. 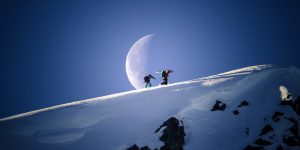 A still from “Ruin Rose.” Photo courtesy of Matchstick Productions.

For the 21st year, Sandpoint will host the touring film festival from Thursday, Jan. 19, to Saturday, Jan. 21. This year, attendees will see 25 films that will take them across the globe and into the essence of the human spirit. According to event organizer Michael Boge, this year’s spectacular offerings are a testament to the filmmakers’ talents and the Banff Film Festival’s reach.

“When I see the films at each festival, I ask myself, ‘Can they do it again next year?’” Boge said. “But then I get to Banff, and it’s like Christmas morning.”

Boge has a tough time selecting favorites from the more than two dozen offerings this year. However, he promises that animal lovers will enjoy the several films prominently featuring furry partners in crime. Meanwhile, several movies are guaranteed to inspire with their portrayals of stalwart adventurers and a fierce love of living.

“They say in the films that life is short, so you better take advantage of it,” Boge said.

“Mira,” for example, follows a young Nepalese woman who pursues her love of running into opportunities she only dreamed of. Through sheer dogged determination, she becomes a success in her sport and competitor on a global stage.

Just as inspiring is “Sea Gypsies: The Far Side of the World.” The film covers a cast of unique personalities with a serious case of wanderlust. Their desire to explore compels them to set off in a 120-foot, hand-built ketch from New Zealand to Patagonia with a side trip to Antarctica. No matter what night of the festival you attend, you’re sure to see amazing cinematography and inspiring stories of courage, compassion and daring.

“It’s really exciting, and especially exciting to see it all come together when the festival comes around each year,” said Boge.

As always, the Banff Mountain Film Festival World Tour does more than provide Sandpoint with some entertainment and culture. Proceeds from the event will go to support the Satipo Kids Project, located in Satipo, Peru. The program supports students who wish to receive an education, including four individuals who have participated for the past 12 years. The festival also support the North Idaho Mountain Sports Education Fund, which helps 72 local kids afford lessons, ski gear and lift tickets to ski at Schweitzer Mountain. Jeff Rouleau and his crew from the North Idaho Mountain Sports Education Fund will come to the festival ready to raffle off some great prizes.

All in all, Boge said it’s shaping up to be another great year celebrating the wonders of the natural world.

“People are not going to be disappointed,” he said. “It’s one of those great community events where you see all your friends.”

See the Banff Mountain Film Festival World Tour at the Panida Theater for three separate nights starting Thursday, Jan 19; Friday, Jan. 20,  and Saturday, Jan. 21. Doors open at 6 p.m. with films beginning at 7 p.m. Tickets are available in Sandpoint at Eichardt’s, The Alpine Shop, Burger Express and The Outdoor Experience. Tickets are also available in Bonners Ferry at the Burger Express. On line tickets can be purchased on the Panida Theater website at https://www.panida.org/event/banff-mountain- film-festival-2016. If any tickets are left they will be sold at the door. Tickets are $16 in advance and $19 at the door.