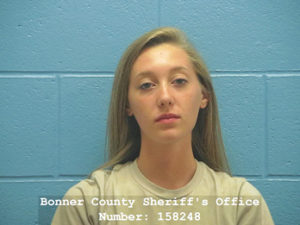 The victim reported that what started as a verbal altercation with two females turned physical. Caitlyn Grace Haskins allegedly hit the victim over the head with what appeared to be a bat. Another 17-year-old female also allegedly took part in the attack. Charged with battery, the alleged juvenile perpetrator has been released to a responsible party, according to a statement from the city of Sandpoint. Both suspects are from the Sandpoint area.

The city reported that police concluded the investigation July 7 and forwarded their findings to the Bonner County Prosecutor’s Office for charges July 8. Police arrested Haskins on a warrant for aggravated battery July 9.

“We appreciate the public’s patience and support as the investigation into this matter was being completed,” said Sandpoint Police Chief Corey Coon in a July 9 statement. “This type of crime is not common in our community and certainly doesn’t define who we are.”

Social media became a major platform for discussing the case for days following the alleged assault. Between several posts on a number of pages — including Sandpoint Local Forum and the City of Sandpoint Facebook pages — more than 1,000 comments and hundreds of shares accumulated. While a great number of the comments expressed support for the victim and her family, many others criticized the police department for what they perceived as a slow response to the incident, while still others disparaged and decried the alleged perpetrators.

Despite the robust online discussion, Chief Coon told the Reader that social media “did not affect how the officers conducted the investigation.” 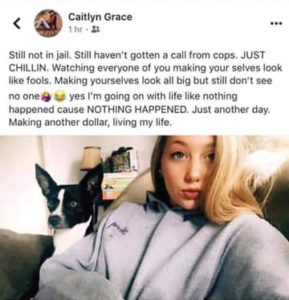 A social media post by Caitlyn Haskins before her July 9 arrest.

One post, made by Haskins on her private Facebook page prior to her arrest, made the rounds on the day police put her in custody. It consists of a selfie above a caption reading: “Still not in jail. Still haven’t gotten a call from cops. JUST CHILLIN.” She goes on to add: “yes I’m going on with life like nothing happened cause NOTHING HAPPENED. Just another day. Making another dollar, living my life.” The post also included laughing and shrugging emojis.

The victim’s mother wrote on her Facebook page July 8 that her daughter received facial reconstruction surgery to treat a broken eye socket, shattered cheekbone and caved-in sinuses. The mother also made a call to action in the same post, encouraging parents to check their children’s phones and talk to them about their lives to learn if they’re being bullied.

“I still can’t wrap my brain around everything but this is the extent of where bullying has gone,” she wrote.

Haskins appeared July 10 in Bonner County Magistrate Court, where bond was set at $50,000.