Representatives from the U.S. Army Corps of Engineers visited North Idaho Wednesday to share lake operation plans and their tentative predictions for what winter will hold. 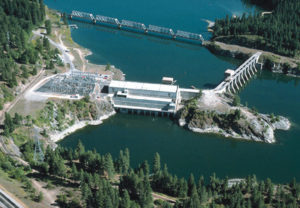 An Aerial photo of the Albeni Falls Dam on the Pend Oreille River. Photo by Army Corps of Engineers.

Upper Columbia Senior Water Manager Logan Osgood-Zimmerman said the Albeni Falls Dam will slowly begin drawing Lake Pend Oreille down after Sept. 18. She said their target is 2,061 feet by Sept. 29, and the winter minimum of 2,051 feet should be reached by mid-November. People should expect slightly declining inflows from the mountains in early September, Osgodd-Zimmerman said, because the snowpack has very little left to give the lake.

Preliminary winter predictions are leaning toward El Nino conditions, the Army Corps reports, meaning a warmer and dryer winter in North Idaho. However, Osgood-Zimmerman emphasized that it’s still too early to have complete confidence in any prediction, and next month the winter forecast should be more solidified.

He said there’s a long-term plan in the works to do more regular upkeep on the Clark Fork boom system. Lawrence said the last boom system upgrades were implemented in the 1980s.