The 7,608-acre Cougar Fire was 50 percent contained on Wednesday, according to fire officials. Thanks to 0.5-0.75 inches of rain on the fire the last couple of days, Idaho Panhandle National Forests officials report that fire growth has been minimal. 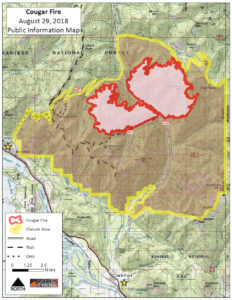 A USFS map of the Cougar Fire near Hope from Aug. 29. Courtesy USFS.

Located five miles east of Hope, the Cougar Fire is moving slowly through mostly creeping and smoldering, fire officials report. However, some tree torching and spotting is still possible. Fire managers are working on brushing out East Fork Road to create an additional fuel break, and earlier this week crews removed the protective wrapping on the SNOTEL site and Keeler Warming Hut northeast of the fire.

The 2,750-acre Rampike Fire spans the Idaho-Montana border southeast of the Surprise Creek Fire. Both IPNF and Kootenai National Forest are working to establish fuel breaks around the Rampike Fire and utilizing bucket drops where necessary.

Area closures are in effect near all aforementioned fires. Find detailed maps on InciWeb.

The U.S. Forest Service announced Monday that the Stage 1 fire restrictions across the Coeur d’Alene dispatch area will be lifted Friday in time for the holiday weekend. However, “while the cooler temperatures and precipitation no longer warrant extreme fire danger, the public is urged to be careful with fire,” USFS announced.

Sandpoint’s air quality has only improved since the worst day of the summer so far, Aug. 19, when the Air Quality Index read into the 300s — classified as “hazardous.” On Wednesday, Sandpoint was at 31 AQI — classified as “good.”

The Environmental Protection Agency forecasts clean air through the weekend.

“Smoke from wildfires can move into the area quickly and degrade air quality,” the EPA warns. “Be aware of changing conditions to protect your health.”

Visit airnow.gov for the most up-to-date air quality readings.