How to argue (without sounding like an idiot) — Part 1

We’ve all been there. You’re at the bar having a beer with friends and that loud blowhard comes in looking to change your mind about something. A friend on Facebook tears apart your post, making it about something completely irrelevant to the issue at hand. At the family dinner table, you are seated next to Uncle Larry, who loves to push your buttons.

Let’s face it, we love to argue — especially nowadays when there is so much to argue about. But what if there was a way to arm the general public with the knowledge to navigate the most predictable traps that come up during day to day arguments?

My second year of college, I took a class on logic and critical thinking. Though it was an 8 a.m. class on Monday morning, I never had to drag myself out of bed to attend. It was absolutely fascinating.
We spent weeks going over logical fallacies, which are errors in reasoning that undermine the logic of an argument. We discussed how to debate effectively, how to identify when someone is trying to pull the wool over our eyes and, most importantly, how to respond with intelligence instead of emotion.

Inspired by comments I’ve read on social media lately (which have been loaded with logical fallacies), I thought I’d crack open my old notebooks and share some of the gems that stuck with me. What follows is the first of a multi-part series designed to teach you to identify logical fallacies in everyday usage. I’ll also include real examples of how these fallacies have been used in the news today. The ultimate goal here is to teach you to argue more effectively.

Many of the examples in this series come from quotes gathered from President Trump’s administration. It’s not my intention to attach any political agenda to this article, but the sheer volume of examples of logical fallacies being used by Trump has made this a rather easy research task. It is my hope you, dear readers, will overlook any partisan bias and focus on the fallacies at hand. 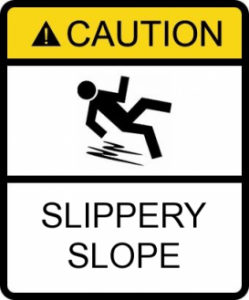 You’ve heard this term before, I’m sure. A slippery slope fallacy works by starting from a relatively innocuous premise, and working through a small number of steps to an extreme and improbable outcome. Just as the name implies, take one step on the slippery slope, you’ll slide all the way down.

That isn’t to say that any logical pattern of conclusions is false just because it ends with an extreme outcome. Some causal chains are completely reasonable. But a slippery slope fallacy suggests that an unlikely and oftentimes ridiculous outcome is likely, despite the lack of evidence suggesting that conclusion.

It’s very difficult to prove something has or hasn’t happened. To prove a series of events will happen is next to impossible. Unless you moonlight as “The Amazing Kreskin,” nobody can predict the future.

When a slippery slope fallacy is used, the culprit broadly assumes the future without proving that any of the proposed steps lead logically to one another.

An example of a logical chain of events: “My math teacher told me if I miss one more quiz, I’ll get an F in the class. If I get one more F, my parents said I would be grounded all summer. If I’m grounded all summer, I won’t be able to hang out with my friends and build that tree fort we’ve been planning.”

An example of a slippery slope fallacy: “If you miss one more quiz, you’ll fail this class, drop out of school, start huffing paint, get kicked out of the house, turn to prostitution, start living on the street and will die alone and bloated before you turn 26.”

A real-world example of a slippery slope fallacy: In August, 2017, during the turmoil involved with the issue of Confederate statues being removed from public spaces, President Trump told NPR’s Robert Siegal: “This week it’s Robert E. Lee. I notice that Stonewall Jackson’s coming down. I wonder; is it George Washington next week, and is it Thomas Jefferson the week after? You know, you really do have to ask yourself, where does it stop?”

Explanation: See how President Trump started with a reasonable premise (that people are calling for Robert E. Lee’s statue to be removed from public spaces because of the Confederacy’s practice of slavery)? He then followed with a slippery slope fallacy by stating that if we are willing to remove a Confederate general’s statue (who fought against the Union), we would also be willing to remove our founding fathers’ statues, such as Washington and Jefferson. The conclusion is not supported by the chain of logic. 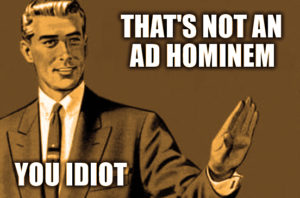 An ad hominem fallacy is a common method of diverting attention away from what might be a weak argument by ignoring the debate points and instead focusing all the attention on the speaker. It can be summed up by the phrase, “You’re wrong because you’re stupid.”

In politics, we refer to this sort of fallacy as “mudslinging,” and it is all too prevalent. It’s also one of the easiest fallacies to recognize.

An example of an ad hominem attack: “My opponent wants to raise your taxes and leave you without health insurance. That figures, since my opponent grew up in the Deep South and therefore has the intellect of a toddler.”

A real world example of an ad hominem fallacy: President Trump’s almost daily Twitter takedowns of those he sees as his opponents are glaring examples of ad hominem fallacies. His use of nicknames such as “Crooked” Hillary Clint, “Lyin’” Ted Cruz and “Failing” New York Times are all glaring ad hominem attacks.

Explanation: By attacking the person instead of the issue, Trump has (successfully) convinced you that the person couldn’t possibly be right about their viewpoint because they are (fill in the insult blank). By telling you how they are lacking before even exploring their viewpoint, Trump has effectively shut the argument down and reduced it to those who agree or disagree with him, debate be damned. 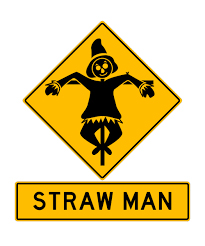 This is another fallacy people use quite often, yet don’t realize it. In the straw man fallacy, someone attacks a position their opponent doesn’t really hold. A straw man fallacy occurs when an opponent’s position is misrepresented to make it easier to tear down. This is oftentimes effective because by attacking the straw man, it creates the illusion that the argument has been refuted when the issue at hand hasn’t even been addressed. Straw man fallacies go hand in hand with ad hominem attacks, especially in politics.

An example of a straw man fallacy: Betty said there would be less violent gun deaths in America if there were universal background checks imposed before purchasing a firearm. Betty’s opponent Jack claims that Betty wants to outlaw the Second Amendment and “take our guns away.” Instead of attacking Betty’s argument (whether universal background checks could reduce the amount of violent gun deaths in America) Jack has attacked a straw man version of Betty – it kind of looks like her, maybe has the same color blouse on, but it’s an extreme of her original argument that isn’t valid. But, it’s easier for Jack to defeat the straw man’s claim than Betty’s actual claim.

A real world example of a straw man fallacy: One of President Trump’s past advisers, Anthony Scaramucci, was comparing climate change science with the “science” in favor of Flat Earth theory (which is a modern-day attempt to convince people that the earth is not round, but flat): “There was an overwhelming science that the Earth was flat, and there was an overwhelming science that we were the center of the world” in Galileo’s day, he said. “We get a lot of things wrong in the scientific community.”

Explanation: While every science teacher or advocate reading this just threw up in their mouth a bit, Scaramucci actually used a very clever straw man fallacy. The “science” that he refers to in regards to the earth being flat was not science at all, but doctrine of the Catholic Church. It is a fact that most scholars, from the ancient Greeks on, believed in a spherical model of the earth. Everyone today (except for those pesky, baffling Flat Earthers) knows the earth is not flat, but round, so this clever argument by Scaramucci tricks us into agreeing with him that science is, indeed “flawed,” that it made a mistake once and it could do it again – especially when referring to climate change.