Six months into the ongoing COVID-19 pandemic, the havoc wrought by the novel coronavirus on everyday life rose into stark relief during the extraordinary session of the Idaho Legislature, which convened Aug. 24-26 in Boise, adjourning at 9:19 p.m. Mountain Time.

Breakages of temper, political fault lines and a glass door in the House gallery dominated the high-tension proceedings at the Statehouse. In an incident that has since made national news, protesters led by famous anti-government activist Ammon Bundy jostled and shoved Idaho State Police troopers to gain entry to the chambers.

The substance of the proceedings were determined through constitutionally allowed executive authority by Idaho Gov. Brad Little to encompass only protocols for safe, secure voting in the November general election and legislation to protect businesses, schools and certain levels of government from civil liability connected to COVID-19 transmission. 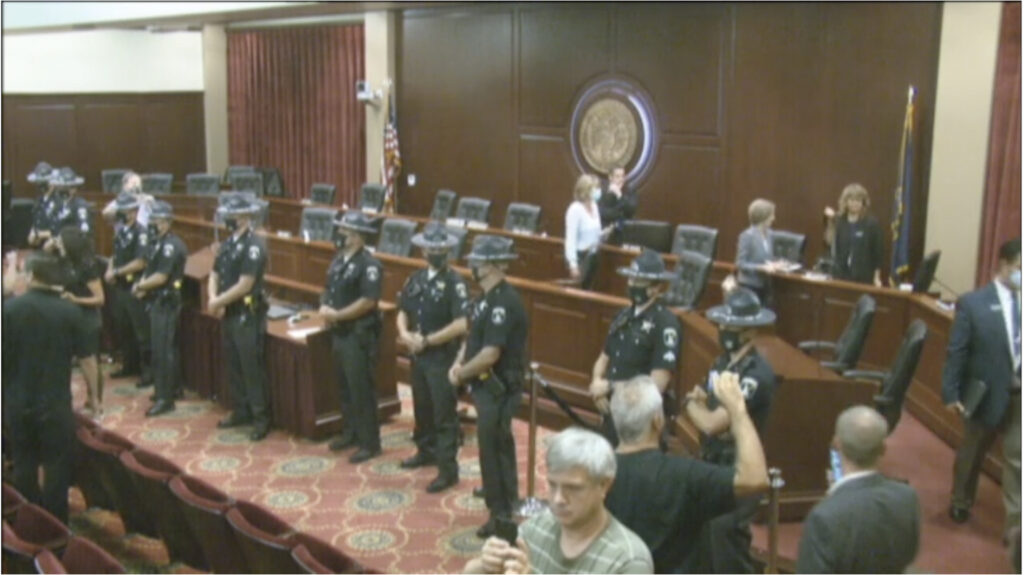 Lawmakers struggled to look past the chaos surrounding the session to pass a bill through both chambers to extend deadlines for absentee ballots in the November election: 45 days prior to the election for overseas or military voters, and 30 days for domestic voters.

It took until the morning of the third day to reach that conclusion — perhaps one of the least controversial measures under consideration — while other agenda items charted a circuitous, tempest-tossed course through the body.

The Idaho House approved a measure that would legislatively terminate the emergency declaration imposed by Little in response to COVID-19, only to be quashed after much sound and fury in the Senate late Wednesday afternoon.

“We did a lot of research. We have two — not one — legal opinions independently solicited with no indication of what answer we wanted to get … that have clarified very clearly that to try to terminate the emergency declaration forcibly from the Legislature during a special session is unconstitutional,” he said, adding later, “We had no choice, folks.”

That said, Hill vowed to return in the general session in January 2021 with a 10-point agenda, including:

Declare all Idaho workers “essential” in any subsequent emergency; calling for an amendment to the Idaho Constitution that would empower the Legislature to call itself into session; considering limitations on the length of emergency declarations from the governor; limiting emergency and spending powers of the executive branch without legislative input; prohibiting “quarantining healthy individuals” in future pandemics; ending orders barring Idahoans from attending places of worship; rescinding existing emergency declarations; limiting the authority of public health districts to levy restrictions during emergency periods, giving that power to county commissioners and school board members; affirming that all Idahoans “have a right to participate physically in elections”; and further affirming Idahoans have the right make their own health decisions.

“We’re putting everybody on notice,” that this will be the agenda for the 2021 general session, Hill said. “Stay tuned.”

Idaho senators approved another bill focused on establishing so-called “vote centers” to allow for in-person voting during the November general election. In the House, lawmakers parsed the legislation closely with Ada County Clerk Phil McGrane testifying at length about the need for temporarily consolidating polling stations to help election officials around the state deal with an expected influx of voter participation. Yet, House members — including Blanchard Republican Rep. Heather Scott — voted to hold the bill in committee, effectively killing it.

Bonner County Clerk Mike Rosedale told the Sandpoint Reader in advance of the special session that he supported the voting centers legislation, despite the fact that Bonner County likely would not employ them.

“I’m urging our legislators to vote ‘yes’; because my fellow clerks are in a pickle,” he said, referring to the herculean task of managing both a record-breaking absentee voting load, as well as in-person voting protocols that require adherence to COVID-19 health precautions.

McCrane referred to Rosedale’s input on the legislation, noting his support for the legislation that would clear the way for populous counties to use electronic polling books to process large numbers of voters who would have been able to cast their ballots at centralized places outside their normal precinct polling stations.

Yet, Rep. Scott found some cause for concern about the “strings attached” to the polling books, though did not specify in committee to what she was referring. She did not respond, as neither did Rep. Sage Dixon, R-Ponderay, to a request for comment on the session. Sen. Jim Woodward, R-Sagle, did tell the Reader that he would provide constituents with an “after-action” report on the proceedings.

On the topic of voting, Rosedale was adamant that the system — tested and successful in the May primaries — works.

“Because of what happened in May, the fact that everybody’s going to vote by mail is baked in the cake,” he said, adding that mail-in voters should be confident in the United States Postal Service to handle their ballot in a secure and timely manner.

“The Spokane and the Salt Lake postal centers said that at the height of the election season their average daily flow only increases by about 2% and they see zero chance that the mail won’t be delivered at the normal rate for first-class mail,” Rosedale told the Reader. “If I find out the Postal Service is about to fail, I’ll be the first to tell you.”

The biggest controversy — by now well saturated in local, state and national media — was the consteration brought forth by the so-called “immunity bill” that sponsor Rep. Julianne Young, R-Blackfoot, shepherded through the various committees and floors of both chambers of the Legislature. The Senate concluded its business Aug. 26 with a vote to approve the measure, sending it to Little’s desk and ending the special session.

That piece of legislation, as amended, would protect individuals, schools and universities, as well as businesses, from legal action stemming from transmission of COVID-19 — provided that complainants can prove they contracted the virus from the “willful and reckless” actions of others who failed to observe measures intended to mitigate the spread of the virus. The bill, unlike its first version, does not protect state or federal governments from COVID-19 lawsuits, nor does it include a previous “good faith” clause, that some feared would turn neighbor against neighbor as they found themselves incentivized to become enforcement agents for public health orders.

Idaho Democrats uniformly opposed the “immunity bill” — termed House Bill No. 6 — on the grounds that it stripped Idahoans of their Seventh Amendment rights to “redress for harm,” should they be exposed to the novel coronavirus due to the negligence of others.

Opposition to the bill made strange bedfellows, as anti-government activist Ammon Bundy — made famous by his family’s armed standoff against federal authorities at their Bunkerville, Nev. ranch and, following that, his leadership of the armed takeover of the Malheur, Ore., bird sanctuary — also protested the bill to dramatic effect. Much testimony was taken in opposition, as well, from citizens who felt the bill represented governmental overreach.

ISP troopers took Bundy into custody twice during the session, as well as a handful of his supporters, as they led disruptive demonstrations in the Idaho Statehouse related to the immunity legislation as well as broad-based critiques of what they have described as government overreach by Little and the state bureaucracy in responding to COVID-19.

Tuesday saw Bundy rolled by law enforcement officers from the capitol in a swivel chair — termed “swivel disobedience” by some legislative watchers — after which he was booked into Ada County custody. On Wednesday, Bundy returned to the Statehouse to again protest, and was trespassed by police and subject to a one-year order not to return to the grounds.

Idaho conservatives — many of whom have expressed support for Bundy in the past, including Reps. Scott and Dixon, who journeyed to Bundy’s armed occupation in Oregon to lend their support and mediation to the takeover — distanced themselves from the “chaos,” as several lawmakers described it.

“Some say you’re an agent of chaos,” said Boise radio host Nate Shelman, of KBOI, to Scott during a recess call-in on Tuesday.

“People want to be heard and people are frustrated from not knowing the process,” she said, going on in the interview to talk about the need for Idahoans to identify the “tyrants we have in place right now,” which she suggested may be found in certain mayors.

Asked “who are the tyrants” — and in light of Scott’s recent comments referring to Little as “Little Hitler” and a “tyrant” for his coronavirus lockdown order — she responded, “That’s not up to me; that’s up to each person in their jurisdictions. … Every individual is going to have different tyrants depending on their standards, on their jurisdictions.”