There will be poetry, song, dance, kilts, bagpipes, drums and Scottish pride. And of course, haggis.

This weekend, Albeni Falls Pipes and Drums of North Idaho is hosting Robert Burns Night at the Heartwood Center. On Jan. 27 from 5-8 p.m., you can celebrate the interesting life of Robert Burns — poet and figure of Scottish nationalism — while also learning more about the non-profit and band, which has been around since 1999. 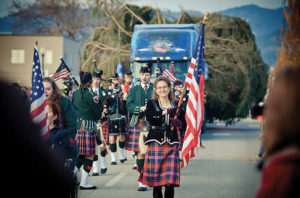 She said the band hosted Robert Burns celebrations in the past, but it’s been almost a decade since the last one. While the parties started small, Kleiber said they grew in popularity.

“We were very surprised at the number of people in our area between Bonner and Boundary County and Montana that do have knowledge of their Scottish ancestry,” she said. “People felt good about being able to celebrate some of their Scottish history.”

She noted attendees don’t have to be Scottish to come to Robert Burns Night.

Kleiber said while the band has ebbed and flowed as far as size, right now the group of pipers, drummers and dancers is smaller.

Robert Burns Night is a good opportunity to meet members of the band and talk to them about getting involved, she said. Kleiber said no prior experience is necessary in order to try the pipes or drums, because part of the non-profit’s mission is to provide free training. Kleiber had never played the bagpipes before she joined the band in 2003.

“We are still around, we want to educate, and if people have more interest, there’s that opportunity,” she said.

Tickets to attend Robert Burns Night are $42, which includes the cost of the meal. Seating is limited, so secure your ticket by emailing band manager Janelle Starr at [email protected] as soon as possible.