Luckily for aspiring cellists of the Idaho Panhandle, Suzuki String Academy is now home to Bianca d’Avila do Prado — originally of Brazil, but who moved to the U.S. to study for her master’s degree in cello performance and string pedagogy at Illinois State University. She made her way to Sandpoint in early 2021 to start Suzuki String Academy’s cello program.

Aside from her work as the instructor for all of the academy’s traditional school-aged cello students, d’Avila do Prado can also be found in the classroom on Saturdays as she instructs the Vivace Cello Ensemble: a group of adult cello students of varying experience levels who have gathered for an hour each weekend since January to improve their skills and celebrate their love for the instrument.

The Vivace Cello Ensemble will play its first ever public concert at the Cedar Street Bridge Public Market on Saturday, May 1 at 3 p.m. 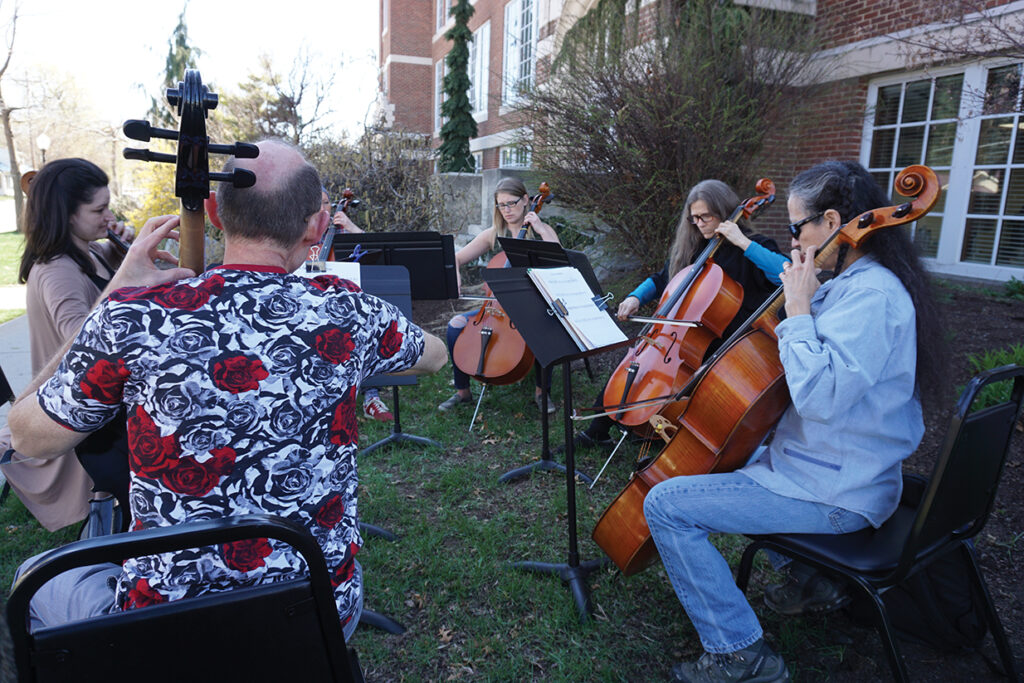 Members of the Vivace Cello Ensemble and their instructor, Bianca d’Avila do Prado (far left), practice outside Suzuki String Academy on April 17. Photo by Lyndsie Kiebert.

“Our main goal with our concert is to share the joy of our cello playing with the Sandpoint community,” d’Avila do Prado said.

The group currently has six members: Kim Grillo, Jamie Davis, Charla Freeborn, Mich Lewis-Sorensen, Doug Pierce and Jason Grace. Each participant joined for a different reason. For Pierce, playing cello is spiritual. For Lewis-Sorensen, it’s about expressing feelings that only the cello can emote. Grillo is fulfilling a childhood dream by learning to play cello, while Davis decided to take the leap after becoming involved with Suzuki String Academy through her son’s violin lessons.

For Freeborn, her connection to the cello is simple, but profound.

“It is the voice of my heart,” she said.

Regardless of motivation, ensemble members’ unified purpose comes through in their music. On a sunny April afternoon on the lawn outside of the academy, the group could be heard rehearsing for its upcoming performance. The sometimes sorrowful, sometimes joyous voices of the cellos drifted in the spring air as the musicians worked through their catalog, hitting on traditional concert pieces, such as Beethoven, then seamlessly transitioning to more familiar tunes, like the Beatles’ “Yellow Submarine.”

The repertoire, d’Avila do Prado said, has been specially created to help students with technical development, while also hoping to create an engaging set for their May 1 audience. A typical Vivace Cello Ensemble practice also includes lessons in posture, tone and scales.

So far, d’Avila do Prado says she’s found Sandpoint to be very supportive of the arts, and that she feels lucky to be a part of the community.

“It is a gift to me, having such motivated and committed students,” she said, “but most importantly, they are a very inspiring group of people with beautiful hearts.”

Those with questions about the Vivace Cello Ensemble or Suzuki String Academy (102 S. Euclid Ave., Suite 106) can email [email protected] or call 208-304-9085. Also find more information about the academy’s offerings at suzukistringacademy.com.