P&Z recommends approval of 13-unit multi-family development at Main and Lincoln, with conditions

Sandpoint Planning and Zoning commissioners voted 4-2 to recommend approval of a 13-unit multi-family residential development Dec. 7, but not before hearing opposition from West Sandpoint neighbors and themselves puzzling over how best to address the “very complicated site,” as Senior Planner Tess Cooper described it.

Owners William and Kathy Friedmann — both 20-year residents and local entrepreneurs — went before P&Z with architect Matthew Kerr, of SOK Design Studio, to request a conditional use permit to build the project on four lots platted in an awkward “L” shape between Main Street and Lincoln Avenue.

Cooper said the difficulty stems from a re-platting in 2004 that resulted in one parcel on Lincoln, one parcel on Main and two trapped in the middle with no frontage on a public right of way. 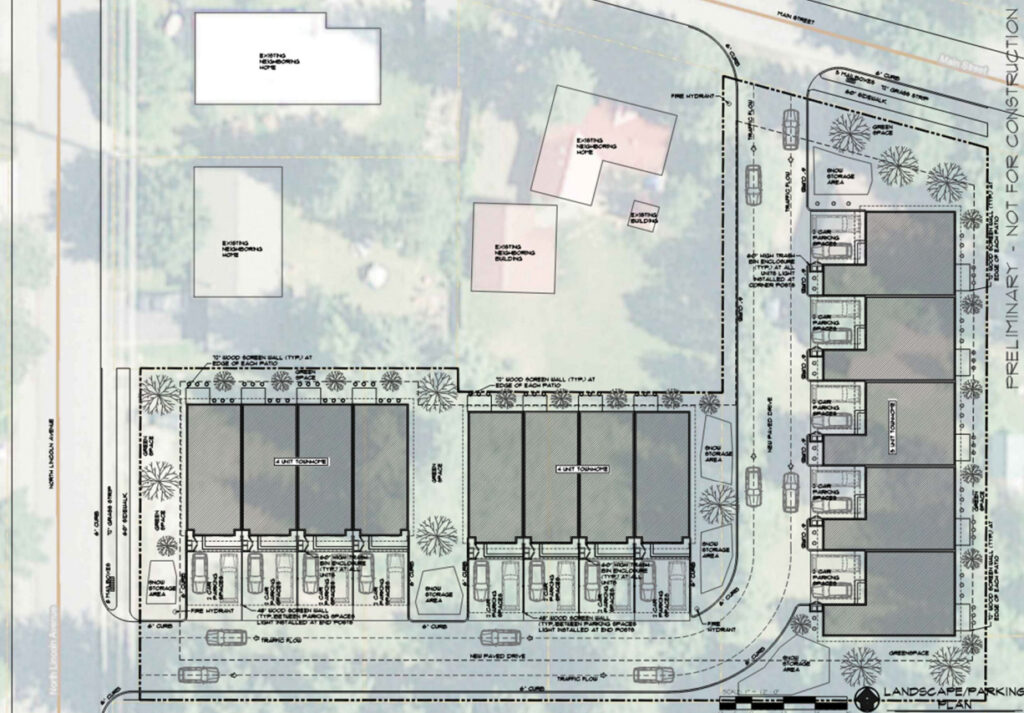 To make those parcels buildable, a private driveway would need to be constructed, effectively connecting Lincoln and Main through the center of the “L.” Doing so would open the way for construction of three separate buildings — two with four dwelling units each abutting the northern property line and one with five, larger units along the eastern boundary.

All the units would be rentals; rise to two-stories; range between 1,300 and 1,800 square feet, with three bedrooms and two baths; as well as feature covered parking.

“I think we’re all aware of the housing pressure that Sandpoint is under right now,” Kerr told commissioners, underscoring that the reason for the CUP application is to build more than the seven units allowed without a special permit. The density is intended “to keep these units affordable,” he added.

Kathy Friedmann said the goal is to keep rental prices between 25% and 30% below market, which is routinely $2,000 or more per month even for smaller units. Friedmann added that as an employer, she sees on a daily basis that, “There’s a really severe need for people in Sandpoint to be able to access housing right now. … My goal is to create housing that people can afford — not just what the market rate is.”

Public testimony ran entirely in opposition, with resident Taylor Bradish speaking at length against the project, which he said “does not meet the Comprehensive Plan in any way you look at it. … It’s a great place for four single-family dwellings.”

Bradish ticked off a number of examples of what he called “misleading” information contained in the staff report, including the private driveway that he said will effectively function as a street, making the parcel a double frontage lot, which is prohibited unless specific conditions require an exception.

“This is being called a private street with city services,” he said. “Let’s not get into that kind of situation when we say something is a private street but offer public services. … A physical design constraint is not an excuse to call a street not a street.”

Bradish also questioned the density of the development when more than half of it is within Context Area-2 of the Comp Plan Land Use Map, which is the city’s lowest-density designation, and was skeptical of claims of “affordability,” noting that to really ensure the units are accessible to local wage earners they should be deed restricted at the appropriate level of income.

Two other residents who showed up to testify volunteered to donate their three minutes to Bradish so that he might continue, further criticizing language in the staff report that identifies certain boundary line areas as “sidelots” when he argued they should be called “backlots,” which would trigger 15-foot setbacks in order to ease the impact on surrounding properties — especially in cases when building heights exceed neighboring residences.

In the maps shown at the Dec. 7 meeting, the middle and eastern buildings are separated from neighboring property lines by a five-foot setback, consistent with a “sidelot” designation.

“This is not harmonious; not one bit,” Bradish said, citing CUP requirements that new construction be “harmonious and appropriate with the existing or intended character of the general vicinity.”

Leanna Nixon, whose home is located directly north of the proposed middle block of rental units, said the project would border 50% of her property line and — combined with a proposed five-foot setback for the two-story structure — would provide no room for privacy landscaping.

“The development infringes on our rights as property owners,” she said. “We feel like our privacy is going to be completely demolished by this. …

“We understand that the city needs more housing to support our workers, but not at the cost of ignoring or misinterpreting City Code,” she added.

Stan Pardee lives just to the south of the proposed development, and agreed “there is no way this is harmonious,” adding that without a larger setback or other height mitigation, he’s worried the second story will look right over his backyard fence.

“It feels like this is being rammed into the middle of the neighborhood,” he said.

Others testified about their concerns over increased traffic and noise, as well as stresses on already limited parking and potential negative effects on surrounding property values.

Interim City Planner Daren Fluke addressed some of those concerns, stating that regardless of the context areas on the parcel, it is designated entirely as multi-family, under which the project is appropriate with a conditional use permit.

The setbacks — and definitions of sidelot versus backlot — proved to be a trickier concept to address, as Fluke admitted strict setbacks are “problematic” because of the shape of the property. Deciding which is the front, back or side of an “L” laid on its side also proved to be difficult for commissioners to grapple with.

“It’s a thorny question because we need the housing and I appreciate the developers’ desire to build it; I’m frustrated with zoning problems left over from the past,” said Commissioner Cate Huisman. “I don’t see this project as fitting in with the scale of the neighborhood and to call what is a rear setback a side setback, it’s technically correct but does not accurately reflect reality.”

After much discussion, commissioners settled on a recommended condition that would keep in place the five-foot setbacks, but in those cases require a further 10-foot step back for the second story — meaning that while the apartment buildings may be only five feet from neighboring boundary lines, their second stories would be 15 feet from adjacent properties.

“I’m afraid that may be the best we can do,” Huisman said.

Ultimately, Commissioners Mose Dunkle, Slate Kamp, Forrest Schuck and Huisman voted in favor of recommending approval with conditions, while Vice Chair John Hastings and Tom Riggs voted “no.” Riggs, for his part, said he would have approved the project as it was presented. Commission Chairman Jason Welker recused himself, citing personal relationships with some of the project opponents.