A talk in the park(ing lot)

Sandpoint city councilors unanimously approved a memorandum of understanding Nov. 16 with the Sandpoint Urban Renewal Agency to pursue redevelopment of the downtown surface parking lot between Main and Church streets, marking the first step toward a long-talked about multi-use structured parking facility.

Sandpoint City Administrator Jennifer Stapleton described the process as including the compilation of feasibility and market reports, as well as the establishment of a steering committee composed of two members from SURA, three representatives from City Hall and one community member, all who would work with Leland Consulting, which has been contracted to shepherd the project.

According to Stapleton, the city would transfer the property — popularly known as the city parking lot — to SURA, which would then collaborate with the city to develop a request for proposals in search of a private developer to redevelop the site.

One model includes the developer constructing a parking facility, then leasing back a certain number of spaces to the city. Another, more common, path is for the developer to build out the lot, “and, in essence, the space would be condoized,” Stapleton said, with city-owned parking on one or two of the floors of the structure, and commercial and residential development occupying higher floors or being intermingled throughout. 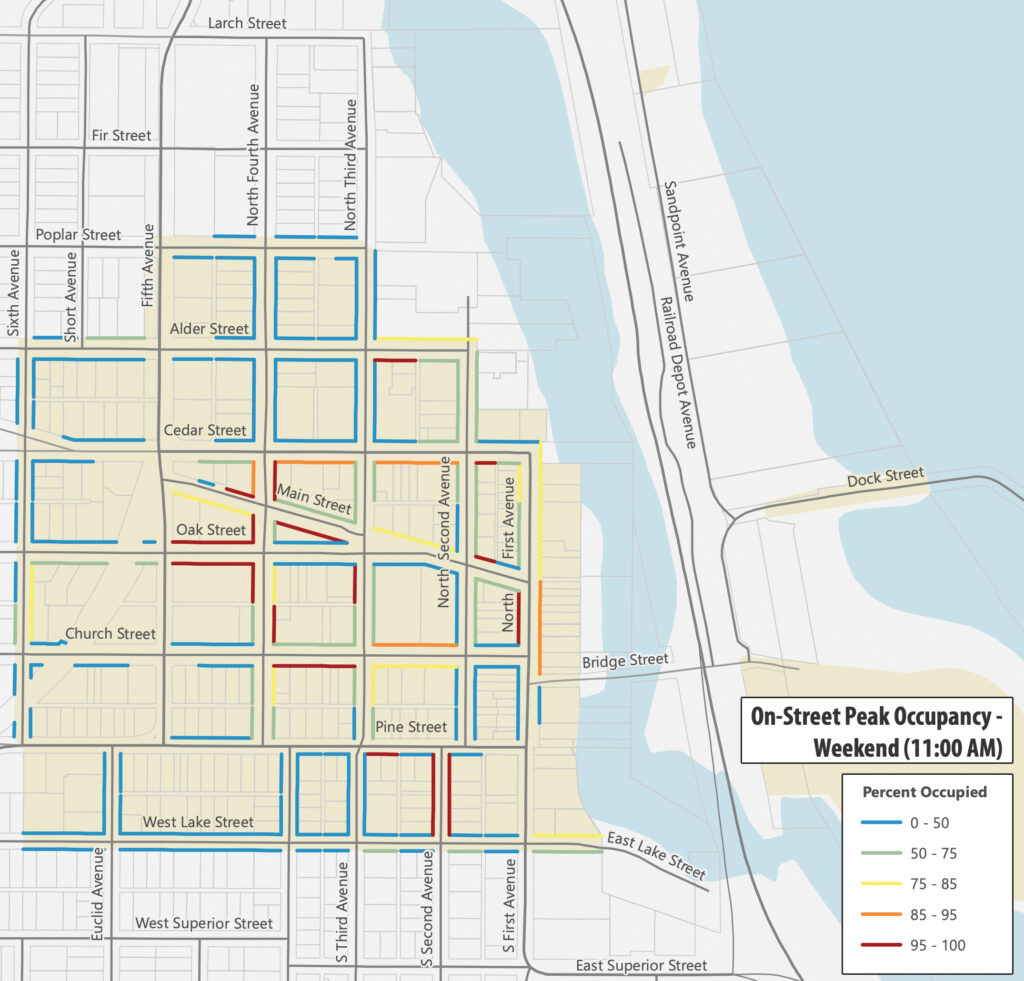 City officials highlighted the public-private partnership model as a way for large capital projects to be completed for the “highest and best use” of municipal property, but without taxpayers having to directly foot the bill.

“It is a growing trend,” Stapleton said, citing examples in Twin Falls and Boise, which include structured parking incorporated with ground-floor retail, and condo, apartment and hotel uses taking up the rest of the space.

“You can get a really nice development,” she said, noting that “there is market demand” for such a project, and it has been a long time coming.

“It’s something that stalled out and just hasn’t moved forward,” Stapleton added.

It’s too early in the process to tell what that might mean for downtown workers, who regularly use the city parking lot during the hours of 9 a.m. to 5 p.m. — currently for free and without a time limit.

The moment seems to be right for the city to bring changes to its parking infrastructure, as it announced a “design competition” in late September for the downtown waterfront redevelopment project along Sand Creek, which Stapleton said extends even to the concept of a downtown parking garage. Depending on the design, the downtown waterfront project will affect at least 43 hitherto public parking spaces.

Likewise, the City Beach redevelopment envisioned in the Parks and Recreation Master Plan will include major revisions to where and how vehicles of all types can be parked at one of the city’s only other free parking areas.

“Really think of it as developing a master plan for our downtown,” Stapleton said.

With the MOU approved by council, Stapleton added that the goal is to kick off the process Tuesday, Dec. 7 with the steering committee appointed by the mayor, and armed with the final report from Leland Consulting on economic development and housing, which is set to go before the City Council at its regular Dec. 7 meeting.

The other critical component for moving forward on the parking garage concept was the presentation of a long-term parking study conducted by Portland, Ore.-based Kittelson and Associates, which representatives presented Nov. 16 to councilors.

Completed during the summer using on-street observation and drone flyovers, the study sought to capture a snapshot of the amount and length of parking occupancy throughout the downtown area on a peak-season Thursday and Saturday in July. The resulting data found that while on-street parking throughout downtown is generally less than the 85% benchmark, there are pockets where the crunch for available spaces rises to 100% and higher during peak times — particularly along First Avenue, at the downtown waterfront and in the area surrounding Bonner General Health. On-street parking around Farmin Park is similarly hard to come by during weekend hours, presumably due to traffic fueled by the Farmers’ Market.

The city parking lot, meanwhile, regularly exceeds the 85% threshold, underscoring the heavy use of the site by visitors and — critically — downtown workers.

“This is really consistent with what you’re seeing in other recreation resort communities,” said Kittelson consultant Wende Wilder, pointing specifically to places like Ketchum and Sun Valley in Idaho, and Bozeman and Whitefish in Montana.

While parking in Sandpoint may feel tight now, the key takeaway from the Kittelson report was what it will likely look like in the next few years, as growth and redevelopment continue. As the report stated: “On-street parking cannot fully absorb peak summer demand with the loss of public lots and increased growth/development.”

And Sandpoint is all but guaranteed to lose at least one of its current public parking options — the Idaho Transportation Department-owned lot along Fifth Avenue, which has provided some spillover from the otherwise at- or near-capacity city lot and Sand Creek-fronting spaces.

Stapleton said part of the urgency for figuring out how to expand parking capacity downtown stems from ITD’s plans for “the couplet” — a realignment of Highway 2 to deal with excess traffic flow, which would eventually require use of those properties currently used as public parking on the west side of Fifth Avenue.

“They’re starting with some improvements on Highway 2 in the next year,” Stapleton said, adding that City Hall expects to see that space lost to public parking in the next five to 10 years.

“When we lose the ITD lot … we do not have the on-street parking to be able to meet that demand that will be pushed onto the streets,” she said. “The plan for the city parking lot is something that we have in process.”

It’s not going to be cheap, however. Wilder, with Kittelson and Associates, estimated that the typical parking garage requires stalls of between 300 and 350 square feet, costing $25,000 to $45,000 per space as a portion of “order-of-magnitude planning.”

In the meantime, there are a number of other strategies the city may explore based on the Kittelson report, including: increasing driver awareness of parking options; increasing travel options such as biking, walking and public transit; managing the existing parking supply, including tweaking the time limitations on certain parking spaces; enhancing enforcement of parking violations; adjusting the permit program; and exploring paid parking programs.

“The challenge in Sandpoint, when you’re a resort and recreational community, is whatever we do as parking management, it’s got to fit the local residents,” Wilder said.

“We have to be really cognizant of taking care of the residents as well as accommodating the recreationalists and tourism folks,” she added.