A simpler time: The 14th Annual Antique and Classic Boat Show in Sandpoint

There’s just something cool about classic boats. They evoke feelings of a simpler pre-war America, when it was the bee’s knees to hop in your old Chris Craft and motor out to your favorite spot on the lake for cold drinks in the hot sun.

The Inland Empire Chapter of the Antique and Classic Boat Society (ACBS) will be bringing back that old feeling with the Annual Classic and Antique Boat Festival in Sandpoint. The show takes place from July 8-10.

What better location to host a classic boat show than on Lake Pend Oreille? The show—now in its 14th year—will take place on the Sand Creek Boardwalk that runs along Sand Creek from the Panida Theater to the Powerhouse. 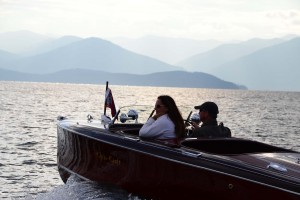 A couple takes a run on the lake during last year’s Antique and Wooden Boat Show in Sandpoint. Photo courtesy of ACBS.

“We’ve got about 52 boats entered this year, which is really good for a show like this,” said BK Powell, a former board member and past president of the Inland Empire Chapter of ACBS.

The Inland Empire Chapter of ACBS is the largest in the Northwest with over 120 members. Powell said an average size regional membership is anywhere from 60-90, meaning that the Northwest prides themselves on their antique and classic boats.

The fun begins at 10 a.m. Friday, July 8, at Sandpoint City Beach with a professional launch crew to help launch participants’ boats safely in the water. They’ll even remind you to put the plug in before launching (we’ve all made that mistake, haven’t we?). After the boats are in the water, there will be a special Welcome Aboard Party from 6:30-8:30 p.m. at Ivano’s Ristorante.

Saturday will be a day of spectating, judging and awards with the public invited to check out this year’s participating boats. Spectators can stroll the Sand Creek Boardwalk from 10 a.m. to 3 p.m. to check out the vintage watercraft. The show will culminate on Saturday evening with the ever-popular Sand Creek Boat Parade at 3 p.m. An awards banquet and silent auction will follow from 5:30-10 p.m. at the Columbia Bank Atrium.

“We have various awards,” said Powell. “Everyone starts at 100 points and it goes down from there.”

Powell said factors for judging include quality, age of boat, correctness of interior and exterior elements, quality of wood and many other categories. 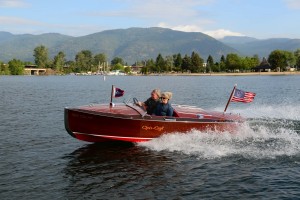 According to Powell, it’s a common misconception that all antique and classic boats are made of wood: “Most people think that these show are just for wooden boats. They’re not. Ninety-nine percent of the boats are wood, but there are a few that choose to restore classic fiberglass boats.”

For Powell and the many participants of the ACBS, restoring and owning a classic boat is a way to keep in touch with a fleeting past.

“It’s a lifestyle,” said Powell. “It doesn’t represent a frenzied time. There are no cup holders in these boats. No racks for toys and accessories. It was a lot simpler time. They were basically pieces of furniture on the water.” 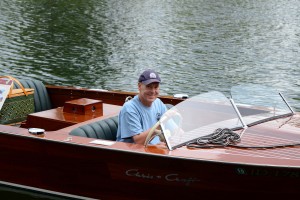 “They represent an era when not everybody had a boat,” he said. “You were somewhat affluent if you had a boat. They all have stories to tell. It’s like sitting around listening to your grandfather at Thanksgiving telling stories.”

Check out the Antique and Classic Boat Show on Saturday, July 9 at the Sand Creek Boardwalk.