How we have changed since the Sept. 11, 2001 terrorist attacks

For Tom Albertson, it started with a simple question: “Did you hear what happened?” 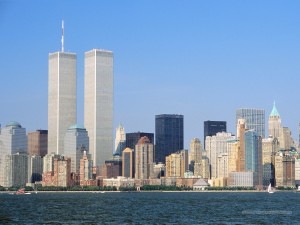 He hadn’t. Without a cable TV subscription at his home, he was completely unaware how unusual the morning of Tuesday, Sept. 11, 2001 would be. As the day progressed, crowds of nervous students, some aware of the attacks and others still in the dark, arrived at the school. Once the news was common knowledge, teachers struggled to keep order.

“We had whole classrooms of students to manage,” Albertson said. “When something like this is going on, you’re supposed to conduct the day as normally as possible.”

Not far away, Corey Coon, now Sandpoint police chief but a patrolman in 2001, was preparing to head into work for the morning shift when the TV news caught his eye. As he watched the attacks unfold, he told his wife to keep an eye on the news—something big was happening.

“It was a really sobering moment for me personally,” Coon said. “It showed that this country really was vulnerable to attack.”

Nearly 15 years later, memories of the Sept. 11 attacks remain as major life events like marriages and funerals. Even in rural North Idaho, tucked away from the busier happenings of New York City, the sense that the world had changed was immediate. And just like the rest of the nation, we live our lives differently today because of that morning.

With the subtle creep of new technology—smartphones, social media and instant connectivity—into our lives, it’s easy to forget the slightly slower trickle of information at the turn of the Millennium. Instead of a classroom full of students glued to their iPhones, Albertson found himself trying to explain the inexplicable to teenagers just as eager for information as everyone else. With only a handful of TVs in the school hooked up to cable service, the library became the de facto information network, and whenever anyone secured a spare moment, they hurried over to see the latest reports.

Parents were similarly troubled by uncertainty over what the rest of the day, or the coming days, would bring, Albertson said. Some turned up at the high school to bring their children home for the day. Many of the kids didn’t know quite what to make of the events.

“Being in North Idaho, they felt a little removed from the attacks,” Albertson said. “For the most part, they just had a lot of questions.”

That unease was evident elsewhere in town, too. Coon found himself working for a far more suspicious and paranoid populace. Anything slightly out of place—an abandoned backpack or an unusual vehicle—was reported in as potential trouble. No one knew how widespread the attacks might be—after all, the Pentagon had been hit and another plane had crashed in Pennsylvania—and no one was taking any chances.

“The fear of the unknown is a powerful thing,” Coon said. “There’s nothing we can do to control that.”

As morning turned to afternoon and the school day ended, an uneasy calm settled over the town. Albertson remembers in particular the strange absence of any airplane or helicopter in the sky. There was no sound of aviation engines, no glimpse of jet trails in the sky. It was an eerie detail of the day, one difficult to notice at first.

For Albertson, Coon and Wheeler, the day felt like a peek into a different world. And in many ways, it was. With the benefit of hindsight, it’s easy to see how Sept. 11 transformed the way they do their jobs. Perhaps it’s naive to say that the days before the Twin Towers fell was a more innocent time, but on the other hand, Americans live with a completely different mindset today.

“We used to … feel protected,” said Sandpoint Fire Chief Ron Stocking. “Now whenever something happens, the first thing that comes to mind is, ‘Is this a terror attack?’”

For instance, Sandpoint High School is completely transformed from its 2001 incarnation due to both school shootings and terror attacks. Around 50 security cameras are scattered throughout the halls and classrooms. Guests must go through a rigorous check-in procedure before they’re admitted into the school. And a school resource officer from Sandpoint Police Department is always present to assist in the event of an emergency.

According to Coon, he’s seen an increase in cooperation between local, state and national agencies. Where once different departments could be territorial, using its own methods and communication means, agencies now shared much more information and support. Likewise, Wheeler said new training standards across all agencies increased the effectiveness and ease of organizing together on the fly.

Fire departments have also undergone drastic changes, according to Stocking. Sept. 11 revealed how ill-equipped firefighters were to handle terrorist attacks, and consequently, terror scenarios are a regular part of training. Likewise, fire and emergency medical service vehicles are now equipped with haz-mat suits or antidotes for possibilities like sarin gas attacks.

“It was a very proactive approach in addressing that firefighters just weren’t prepared for terror attacks,” Stocking said.

Wheeler sees potential terror attacks as a persistent threat to this day. He believes this may come from terrorist cells operating at the behest of groups like ISIS. He also sees the country’s borders as a major vulnerability.

“We have been deficient in doing our best to enhance security with our open borders,” he said.

Perhaps the most insidious effect of the Sept. 11 attacks wasn’t its destruction or death toll, but its erosion of American peace of mind. Ultimately, it’s hard to think of the future without wondering whether a similar disaster is just around the corner.

“Sept. 11 completely changed the way we live our lives,” Stocking said. “In that way, it’s a terrorist attack that is still ongoing.”